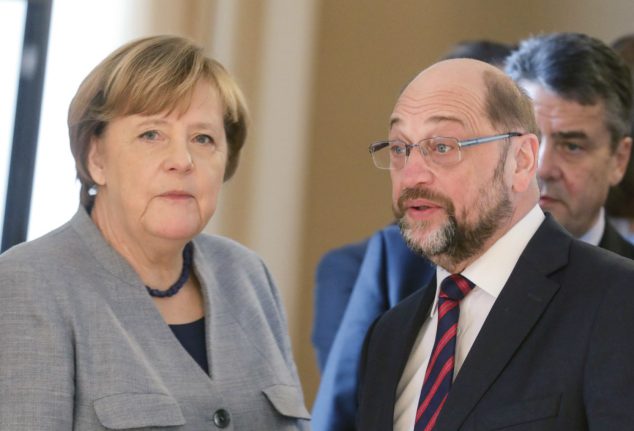 After more than 24 hours of talks and months of political paralysis, red-eyed party chiefs and their negotiating teams reached an in-principle agreement to start formal coalition talks that could lead in coming months to a new government for the biggest EU economy.

In the all-night negotiations in Berlin, Merkel and her Christian Democrats, Horst Seehofer of her Bavarian allies the CSU and the Social Democrats (SPD) chief Martin Schulz hammered out a 28-page paper that will form the basis for the talks ahead.

The hope was to form a new government “before Easter”, which falls on April 1, said Seehofer.

In their joint blueprint, the three parties agreed on key policy outlines — to join EU partner France in a push to “strengthen and reform” the 19-member eurozone, to limit the controversial influx of asylum seekers to Germany to around 200,000 a year, and to refrain from tax hikes given the healthy state of state coffers.

Despite the deal, potential pitfalls remain, including upcoming votes by sceptical SPD delegates and then party members that could yet derail plans for another left-right “grand coalition”, the constellation that has ruled Germany for the past four years and remains in charge as a caretaker government.

Germany has been in political limbo since a September 24th election in which Merkel failed to win a clear majority – in part due to the rise of the far-right and anti-immigration Alternative for Germany (AfD) which took millions of votes from all major parties.

Merkel initially turned to two smaller parties, the Free Democrats and Greens, to form a new coalition government for her fourth term. But when those talks collapsed in November, she had to once more woo a reluctant SPD for a new power pact.

Both Merkel and Schulz went into the talks Thursday warning of “big obstacles” ahead, but also knowing that their political lives were on the line.

“The negotiations are not just about a coalition, but also their careers,” said Karl-Rudolf Korte of Duisburg-Essen University. “It would be the end for all three if this coalition does not come about.”

In the tough talks, all sides have been under pressure to deliver some of their parties' signature policies.

A key SPD position was reflected in a pledge that Germany would, “in close partnership with France, sustainably strengthen and reform the eurozone so that the euro can better withstand global crises”.

But the party failed with a demand to raise taxes for the very rich.

The embattled mainstream parties have also struggled to fend off the encroaching far right, which has seized on anger over a mass influx of more than one million migrants and refugees since 2015.

A new coalition deal can still be torpedoed when SPD delegates, and later rank-and-file members, get to vote on whether the party should once again govern in Merkel's shadow.

Scepticism is high after the SPD scored a humiliating result in September, its worst of the post-war era. That initially led Schulz to vow to head into opposition to rebuild the party's fighting spirit and voter appeal.

The SPD's youth wing chief Kevin Kühnert has said he would embark on a national tour to press his case against a new grand coalition, known as “GroKo” in German political shorthand.

“The mood of the party rank-and-file with regards to a grand coalition is still grim. That's why I think we have a good chance,” said Kühnert.

Opinion polls suggest most Germans are less than enthusiastic about a new conservative-SPD alliance, with a Focus magazine survey giving it just 30 percent support.

Political observers also judge that Merkel, damaged by the poor election outcome, is now in the twilight phase of her reign.

“In the interest of her party's electoral strength, she should not stay in office for the entire legislative term.”