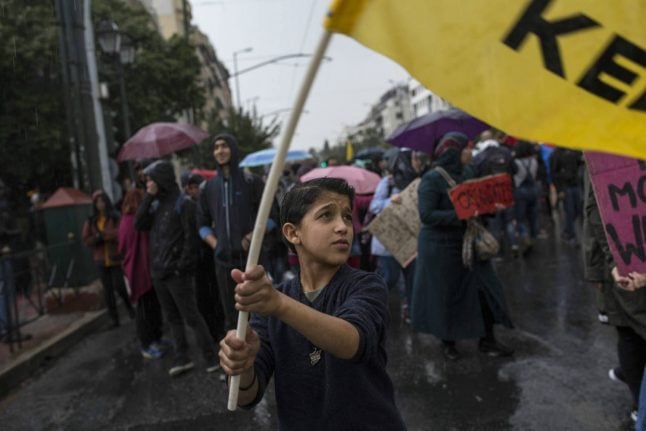 A boy waves a flag in front of the German embassy in Athens during a protest over family reunification. Photo: DPA

Here are some of the hurdles that the two sides will have to overcome before advancing to formal coalition negotiations towards a government by spring.

September's elections which left Merkel without a majority and the SPD with a record low score, saw a surge in support for the far-right AfD.

The upstart anti-immigration party had capitalised on misgivings about the huge influx of more than a million asylum seekers who have arrived since 2015.

Anxious to stem the haemorrhage of support to the far right, the conservative wing of Merkel's CDU as well as her Bavarian alllies the CSU are keen to cut back on arrivals.

The conservatives in particular want to extend a halt on family reunions for asylum seekers granted temporary refuge.

But during its electoral campaign, the SPD had promised to lift the suspension on family reunifications — which is due to expire at the end of March.

“We are talking about less than 70,000 people,” said SPD chief Martin Schulz.

But the CSU in particular is wary about compromising on the issue as it is anxious to keep the AfD at bay in Bavaria where key regional elections will be held this autumn.

All three parties are pro-European and in favour of reforming the bloc but divided about how, especially when it comes to paying for it.

The Social Democrats back French President Emmanuel Macron's proposal of a European budget for common investments in the region.

But Merkel's party is sceptical, seeing it as a pooling of member states' debts or the transfer of German cash to troubled economies.

French proposals for a eurozone finance minister have been positively received all round, but the sides have differing views on the role such a regional minister would play.

The SPD believes the minister should work to end fiscal competition among member states, while the conservatives want someone who will police member states' debt levels – a task now performed by the European Commission, which is perceived as too lax by some.

The Social Democrats, who had campaigned for greater social justice, need to extract some key concessions on welfare if they are to get any deal with the conservatives approved by party rank and file.

The centre-left party is pushing for more spending on education, social housing, infrastructure and health.

And to fund that, it wants the top tax rate to be raised to 45 percent from the current 42 percent.

It wants to gradually phase out a solidarity tax – to help the former communist east catch up with the west – starting first with the lower and middle classes.

The conservatives baulk at tax hikes. Instead, they want lower taxes and for the solidarity tax to be scrapped across the board.

They also want funding increased for defence, something that the SPD opposes.

Further, the SPD wants to create a new universal medical insurance, an idea that has not found favour with Merkel.