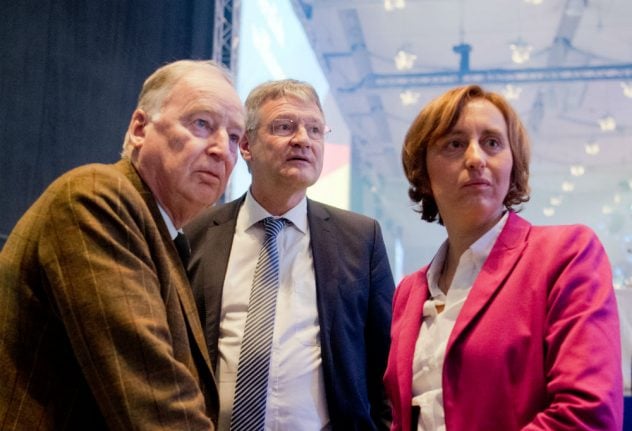 If the AfD had been at pains to portray itself as a patriotic conservative force after the September 24th polls, the latest slur signalled that an extremist faction is winning the battle for control, say political scientists.

“The radical course has been cemented,” said Hajo Funke of Berlin's Free University, adding that the AfD was now openly reaching out to the right-wing extremist fringe, including neo-Nazis and white-pride Identitarians.

Funke said the former anti-euro party had steadily radicalized, purged its more moderate figures, built bridges to groups such as the anti-Islam Pegida street movement, and had never publicly expelled a far-right member.

While the AfD's declared enemy, Chancellor Angela Merkel, has been struggling to form a new government with the Social Democrats, the AfD has barely been out of the headlines in recent weeks.

In a familiar pattern, its provocations have been followed by vague apologies but also complaints about “political correctness” and censorship by a liberal media and political “thought police”.

AfD deputy leader Beatrix von Storch started 2018 by attacking police in the western city of Cologne for tweeting in Arabic, as well as in German, English and French, on New Year's Eve.

“What the hell is going on with this country?” she wrote. “Did you mean to placate the barbaric, Muslim, gang-raping hordes of men?”

The comment pointed to mass sexual assaults there in 2016 by mostly North African men whom the far-right labelled “rapefugees”.

The inflammatory tweet was quickly taken down, while Cologne police filed a criminal complaint.

And AfD chairman Alexander Gauland charged that the new online “censorship law” amounted to “Stasi (secret police) methods” from the former communist East Germany, a region which is today the party's heartland.

The tweet was deleted, and Maier apologized while insisting it was written by a staff member who no longer worked for him.

The party's leadership warned Maier to take greater care in managing his employees.

Noah Becker filed a criminal complaint and his father demanded “consequences” in an article for a Sunday newspaper.

“That's what they always do in the AfD, that's their trick: put something out there, then distance yourself from it,” Becker charged.

The AfD, formed in 2013 as an anti-euro party, two year later shifted course to capitalize on fears about a mass influx of more than one million asylum seekers to Germany, while demanding “Merkel must go”.

It won almost 13 percent of the vote on September 24th, the strongest showing for a far-right party in the post-war era.

There has been no sign of voters deserting the AfD after using it to register discontent with the leftward drift of Merkel's Christian Democrats at the election, as some political observers had speculated.

A new poll this week by Spiegel Online gave it 14.7 percent support.

In a country that has long struggled to deal with its collective guilt over the Nazi era and the Holocaust, the taboo-breaking new extremists have reawakened deep fears about rising xenophobia and race hate.

Berlin daily Tagesspiegel said “the worst thing is that, the more AfD officials say such things, the more quickly they become normal. The outrage wears off, and at some point there will no longer be an outcry.”

Funke said the recent hardline tweets “did not happen because someone's computer mouse slipped, they were calculated”.

“Their idea is we unleash the aggression, we want to integrate the far-right, the neo-Nazis, into our party.”