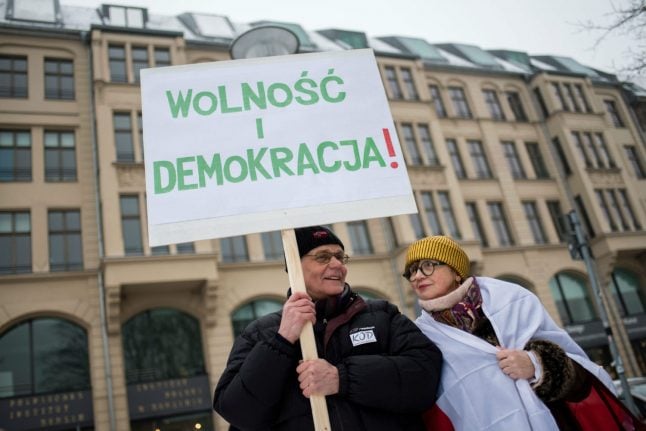 Ula Lachowicz, 34, left Poland in 2014 for Germany, attracted by a booming job market. But today, employment is no longer the reason keeping her from returning home, she said.

In the last two years, “we have lost the freedom of speech, the freedom of having one's own opinion, or doing what we want with our sexuality or culture” in Poland, said the marketing graduate from outside the northeastern city of Gdansk.

Lachowicz is one of a growing number of young Poles who are turning their backs on their home country, which they say has become stiflingly conservative.

Numbering more than 783,000 in 2016, including 55,000 in Berlin, Poles now make up the second biggest foreign community in Germany, after the Turks.

The diaspora was long attracted to Europe's biggest economy for the jobs and higher salaries it offers compared to Poland, which became a member of the EU in 2004.

But since the nationalist and conservative Law and Justice party (PiS) took power in 2015, some Poles say employment is no longer the only reason pushing them to Germany.

Rather, these young and pro-European Poles say they have left their native land in search of a more liberal climate.

No official data is available on how many they number, but there are now regular forums by young Poles on the issue.

The Polish embassy in Berlin noted that Polish emigration “has been going on for years and statistics show no dramatic increase in the number of Polish emigrants since the ruling PiS party won the 2015 parliamentary elections.”

It added that surveys show that most Poles who leave are motivated by financial reasons.

“It is difficult to determine whether their decisions are also politically motivated or not,” said the embassy.

'With us or against us'

Aleksandra Zebrowska, who arrived in Berlin in early 2017, argued however that Polish society “is less and less open, definitely more nationalist and more centred on Catholicism.”

The 26-year-old had moved from Warsaw to Berlin partly for work and its proximity to Poland, but she said that above all, she picked Germany because there she feels “simply free”.

Zebrowska, who works in the music sector, is part of a young generation of Poles who have benefited from the EU project.

The European Erasmus student exchange programme took her to Brussels for a year, while she also obtained a master's degree in the Netherlands.

When she returned to Poland in 2015, a liberal government was still in charge.

But “after the elections, everything changed very quickly,” she said of the PiS which returned to power in October 2015 after eight years in opposition.

“Everyone looks at each other with suspicion… it's exactly the feeling that my grandmother had during the communist era — you're either with us or against us.”

The PiS's arrival in power has been accompanied by increasingly fraught ties with Germany, including over Warsaw's hardline stance against taking in asylum seekers during a record influx of refugees to the EU in 2015 and 2016.

Warsaw is also seeking to claim World War II reparations from Germany, even though Berlin insists that the issue had been settled decades ago.

On the European stage, Poland is posing a challenge to the authority of Brussels in enforcing democratic standards.

“The situation.. clearly changed” in the last two years, said Maria Skora, 33, who arrived in Berlin in 2015 from her native Wroclaw.

The project manager at a centre-left German think-tank said she found in Berlin the diversity that was lacking in Poland that she found to be “in an impasse.”

In a country which preaches a heterosexual and Catholic family structure, Filip Rutkowski, a 25-year-old gay artist, said he did not feel at ease.

“I didn't fit the mould,” said Rutkowski, who has been living in Berlin since May last year.

In his new home city “we can express ourselves as we want, without being judged, without having to explain ourselves,” he said.

Journalist Ewa Wanat, 55, claimed that Poland is now ruled by a “soft dictatorship” as freedom of the press is greatly curtailed.

A former editor-in-chief at the public radio station RDC, Wanat said she was let go shortly before the PiS came to power for refusing to fire an employee who was seen as feminist and left-leaning.

For the laureate of the “Tolerantia” European prize against homophobia, a hardline push was already in the making and was a harbinger of the conservatives' victory. In 2016, she bought a one way ticket to Berlin.

She can't imagine returning to Poland now, saying that in Berlin, “the atmosphere is free.”