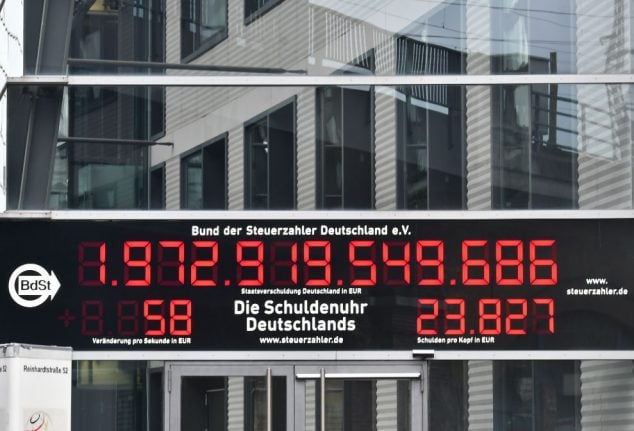 The 'debt clock' in Berlin photographed in December. Photo: DPA.

In a sign of Berlin's famously tight fiscal discipline, it shows public coffers moving into the black at a rate of €78 ($94) per second.

Granted, at this pace it would take some time – more than 800 years – for federal and state governments to pay off all of the massive €2 trillion ($2.4 trillion) they owe.

But the Federation of German Taxpayers (BdSt), the group that set up the digital clock, nonetheless hailed the turnaround as a good sign for Europe's biggest economy.

“Only recently the federal and state governments bore responsibility for this policy of piling up debt,” said its president Reiner Holznagel in a statement.

“This policy that harms future generations has fortunately now been stopped.”

But Holznagel said the effect would only be reflected in national and regional budgets from this year.

The BdSt, famous for its annual “black book” listing absurd or questionable uses of public funds, set up the clock at the entrance to its central Berlin headquarters in 1995.

German Chancellor Angela Merkel and her fierce former finance minister Wolfgang Schäuble enshrined balancing the books – a goal known as the “black zero” – at the heart of their programme from 2014.

In fact, the country has in recent years booked budget surpluses running into billions.

The bonanza is expected to continue over the four years ahead to the tune of €30 billion according to Peter Altmaier, Merkel's factotum now running the finance ministry.

As coalition talks with the Social Democrats get under way, politicians see the cash as an opportunity to lavish gifts on their bases in the form of tax cuts, higher spending or public investments.

But on the European scale, such fights are a luxury problem.

With debt at 68.1 percent of gross domestic product, Germany is one of the few EU members that approach the 60-percent limit set in the Treaty of Maastricht, along with Lithuania, Estonia, Luxembourg, Finland and the Netherlands.

Meanwhile, France and Spain remain in the European Commission's sights for annual budget deficits above 3.0 percent of GDP per year, meaning they are building up debt too fast under EU rules.

In theory, both nations could face fines from Brussels if they fail to tighten the purse strings – although the Commission has never levied such a punishment, even on repeat budget sinners.