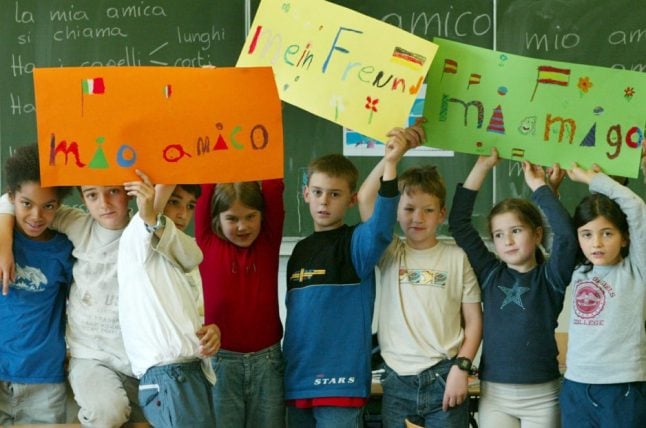 Children at a German-Italian school in Hamburg. Photo: DPA

Years ago, when my children still wanted to go to playgrounds, I spoke to my son, dangling from the jungle gym at a Berlin playground, in my native English language. An elderly woman sitting at an adjacent bench said to me in German: “You should speak to him in German, otherwise he'll get confused.”

As my gut instinct suspected, the woman was not only nosy, she was wrong. Language experts agree that children are capable of learning more than one language without being confused – this was one of the first conclusions in a Florida Atlantic University study on multilingualism in children's language development.

Another conclusion from the study was that immigrant parents should not be discouraged from speaking their native language to their children.

“Children in immigrant families who can speak their parents' heritage language have better family relationships and stronger ethnic identities than those who cannot. Good family relationships and strong ethnic identity are positively related to other desired outcomes, including academic achievement,“ write the study's co-authors Erika Hoff and Cynthia Core.

Bilingualism may have been considered a disadvantage many moons ago, when the woman on the bench had small children of her own, but today bilingualism is widely considered among experts to be a great benefit to children who are lucky enough to be raised with two languages.

In Germany, every ninth child born in 2015 was binational, according to the Federal Statistical Office.

“Multilingualism is not a deficit, but an enrichment,” Claudia Maria Riehl, director of the German as a Foreign Language Institute at the Ludwig Maximilian University of Munich told the Goethe Institute in an interview.

“We know from neurology that the brain areas required for a certain language are more compactly organized in multilingual children. This basically means that for each newly learned language, fewer brain areas have to be activated. Moreover, multilingualism seems to favour the ability to control attention. Multilingual children are better able to 'switch' between different requirements because they practise this mechanism by constantly switching between two or more languages.”

“If you have two languages and you use them regularly,” Bialystok told The New York Times in an interview, “the way the brain networks work is that every time you speak, both languages pop up and the executive control system has to sort through everything and attend to what's relevant in the moment.”

Eleven years since the playground incident, and with my children attending a bilingual school, I barely flinch when I hear various languages inserted into one family's conversation. Denglish can be heard in my house and around the school; nowadays most of the children we encounter are truly bilingual.

Other families at our school juggle with even more than two languages.

Middle-schooler Toninho, who has an American father and a Japanese mother, speaks both English and Japanese fluently. He also speaks German since they moved to Berlin in 2012.

“He'll have to start taking French or Spanish soon,“ says his father Tony Laszlo, an American author who speaks Japanese and Mandarin, as well his native English, of the school's curriculum.

“To help prepare him for that journey, we have exposed him to Esperanto, a constructed language largely based on Latin, in a simplified form.”

“He has gained fluency quickly, mostly by playing card and board games, learning how to solve the Rubik's cube and to juggle. For fun, I had him take a short Latin quiz recently. He did surprisingly well, so I suspect that the Esperanto is helping him along.”

“Stick to the one person one language rule: OPOL. Children will sometimes choose to reply in only one language – this is normal. Bilingualism develops in a dynamic way depending on input and opportunity.”

“Follow the child's focus of attention and communicate what they are doing and what is happening with simple language and in slightly longer sentences than what the child is using.”