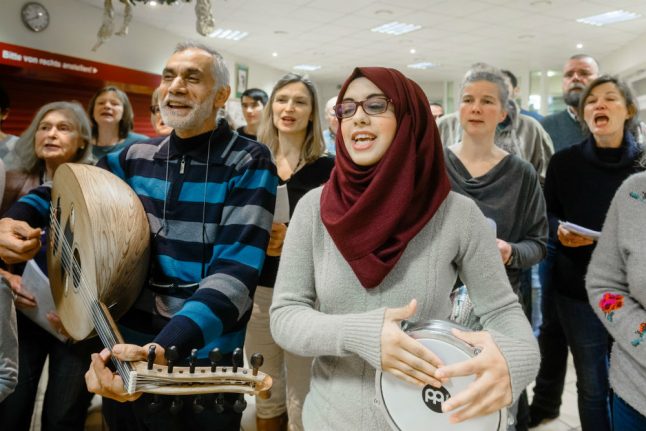 Refugees and residents singing together in Schleswig-Holstein. Photo: DPA.

Criminologists are calling for better prevention measures to deal with violence committed by refugees, following the release of a study shared with the German Press Agency (DPA) and the Süddeutsche Zeitung, among others. The study recommends refugees have access to language courses, sports, internships and more exposure to women.

The authors of the Ministry of Family Affairs-commissioned study are forensic scientists Christian Pfeiffer, Dirk Baier and Sören Kliem.The trio examined the increase in violent crimes observed in Germany over the past two years, according to police crime statistics.

In the federal state of Lower Saxony, the authors draw a link between increased violence and the influx of refugees: between 2014 and 2016, the number of police-recorded acts of violence in Lower Saxony rose by 10.4 percent – 92.1 percent of this increase can be attributed to refugees. This is not surprising, according to the study, in that a noticeable proportion of refugees are young men in the age range in which people are increasingly delinquent.

SEE ALSO: Why are refugees disproportionately likely to be suspects in sexual assault cases?

However, the authors point out that violent crimes committed by refugees for various reasons are reported at least twice as often as those committed by German perpetrators. A further role is played by placing refugees of different origins and religions in cramped accommodations, which encourages violence.

One third of the victims of refugee violence are other refugees, the study finds. Ninety percent of the killings in which the refugees have been identified as suspects were the victims of other refugees or foreigners. This was also the case for three-quarters of serious bodily harm caused by refugees. According to the study, people with good future prospects were less likely to be convicted.

A lack of female influence

An important aspect of the problem, the study found, is that refugees in Germany often live in groups of men – without a partner, mother, sister or other female reference person.

“The lack of women is having a negative impact everywhere,“ says criminologist Pfeiffer. This shortage increases the risk that young men will orient themselves “towards masculinity norms that legitimize violence,“ the study states. Pfeiffer thus considers the idea of family reunification to be “not so dumb.“

The scientists also believe that it makes sense to have an immigration law that clearly sets out the conditions under which foreigners can be naturalized. This creates a strong incentive for them to commit themselves to the fulfilment of the immigration requirements,“ the study states and suggests that rejected asylum seekers should also receive more support in their home country. In return, the state should inject more funding for projects in the refugees' home countries.

On Tuesday evening's news broadcast of Heute Journal, Pfeiffer, who was the former director of the Criminological Research Institute of Lower Saxony, called for new perspectives in the refugee policy in upcoming coalition negotiations.