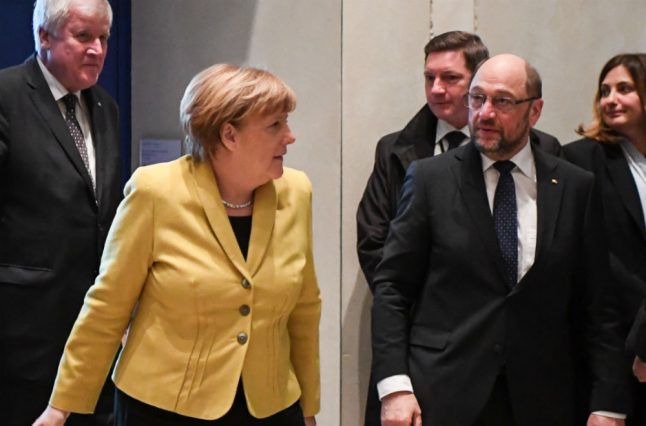 In the year's first such meeting, Merkel and her Bavarian ally Horst Seehofer were scheduled to talk with Martin Schulz, the leader of the centre-left Social Democrats (SPD), from about 1400 GMT.

They hope to lay the groundwork for a week of exploratory talks from Sunday which – if all sides can overcome major policy differences and lingering distrust – could lead to a new “grand coalition” government by perhaps March or April.

SEE ALSO: The SPD in a Grand Coalition? What you need to know

However, the joyless effort to give a new lease of life to the alliance now running the top EU economy in a caretaker role was complicated this week when Seehofer's CSU presented a series of hardline positions that run counter to SPD demands.

The CSU – which seeks to claw back votes from the far-right Alternative for Germany (AfD) ahead of Bavaria state elections later this year – argued that Germany must, among other things, cut state benefits for asylum seekers.

“Germany no longer wants to be a magnet for refugees from all over the world,” said one of the CSU's chief negotiators, Alexander Dobrindt, referring to the influx of over one million asylum seekers since 2015.

The party, which regards itself as Germany's most conservative mainstream force, also wants to boost defence spending and rejects an SPD demand to reform education policy.

Merkel, in office for 12 years, won September 24th elections but fell short of a clear majority and has since been struggling to form a new coalition.

In her New Year's Eve address Sunday, she urged all sides to work quickly for a stable new government, warning that “the world isn't waiting for Germany”.

Her hopes to govern for a fourth term until 2021 were complicated when initial talks to build an alliance with two smaller parties – the liberal Free Democrats and the left-leaning Greens – collapsed in November.

She is now working for a re-run of her current left-right “grand coalition” with the SPD, but the traditional labour party has been reluctant to govern again in Merkel's shadow after a dismal election result.

Schulz, facing a sceptical party base, has only agreed to “open-ended” talks that could also lead to the toleration of a Merkel minority government – an option which she however rejects as too unstable.

In the upcoming talks, Schulz will have to prove to his demoralized party that a new Merkel-led government will adopt some of the SPD's signature policies, from helping the working class to boosting European integration.

Major hurdles remain, starting on January 21st when 600 SPD delegates will decide on whether to push on with formal coalition talks.

Ultimately, the party's rank-and-file will be asked to give the thumbs up or down to a new grand coalition, with a “no” vote likely leading to fresh elections.