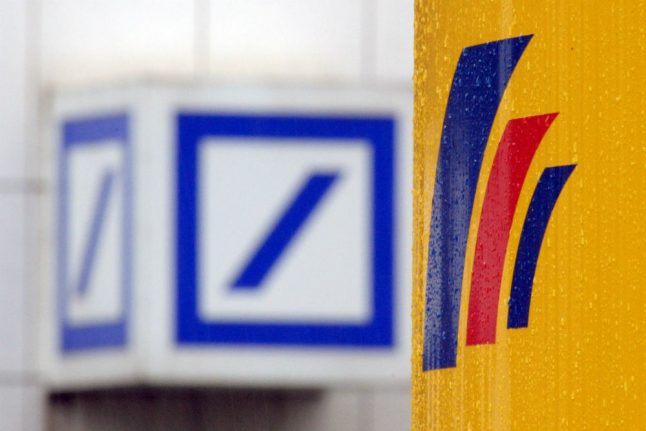 The Deutsche Bank logo behind the Postbank logo in Bonn. Photo: DPA.

At the heart of the suit is the question of when Deutsche took control of Postbank from its previous owner, logistics firm Deutsche Post.

The investors argue that Deutsche Bank was already in de facto control of Postbank two years before it launched a full takeover of the bank.

“Deutsche Bank intervened significantly in Postbank's business and took over control” as early as 2008, two years before it bought out the plaintiffs' shares, their Munich-based lawyer Oliver Krauss told business weekly WirtschaftsWoche.

The shareholders say they should therefore have been paid the value of their stock as it stood in September 2008 – around €64 per share – when Deutsche controlled just 30 percent of Postbank, rather than the €25 they received in the full takeover two years later.

Some 31 German and international investors are involved in the suit with claims totalling around €740 million.

According to court documents seen by WirtschaftsWoche, the plaintiffs accuse Deutsche Bank of striking “numerous contracts and agreements, some of them secret” with Postbank's former owner Deutsche Post in 2008.

They allegedly included giving up risky financial market activities in favour of retail banking, details of a capital increase at Postbank, personnel changes in the executive and supervisory boards, and the decision not to pay out a dividend in 2008.

Meanwhile, Deutsche Post put its Postbank shares at Deutsche Bank's disposal for trading and agreed to use its voting rights to back the financial titan's plans for the subsidiary.

Such agreements helped both sides weather the years after the financial crisis, the plaintiffs argue, saving Deutsche Post from losing money on its investment and offering more flexibility to Deutsche Bank as it battled to right itself.

“We believe the claims made in the suit are unfounded,” a Deutsche Bank spokesman told AFP.

A fresh legal suit is unwelcome news for Deutsche, which in recent years has made clearing up old entanglements a priority as part of a wider restructuring.

It has paid out billions of euros in fines and compensation over some of the highest-profile cases like interest-rate fixing or mortgage-backed securities linked to the financial crisis, but remains a target in thousands

JOBS
Deutsche Bank to shut down one in five German branches
Url copied to clipboard!