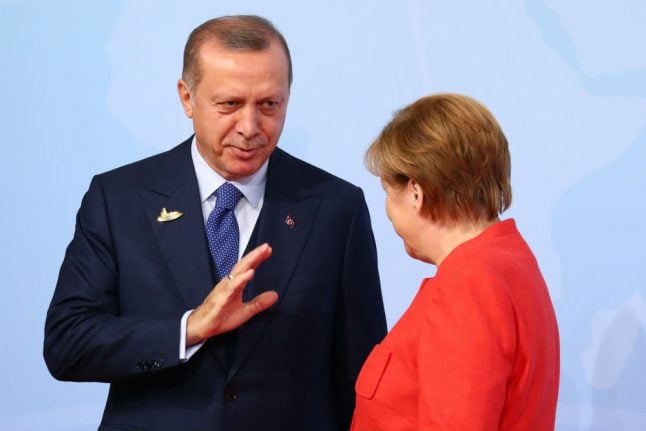 President Erdogan and Chancellor Merkel at the G20 summit in Hamburg in July. Photo: DPA.

The past year has seen Turkey's long-running bid to join the EU grind to a virtual halt and a crisis in relations with Germany over the crackdown that followed the failed July 15th 2016 coup.

“Of course, we want to have good relations with the EU and with EU countries,” Erdogan told Turkish journalists on his presidential plane while on a visit to Africa.

“I always say this. We must reduce the number of enemies and increase the number of friends,” he said, in comments published in Turkish newspapers including the Hurriyet daily.

He said there was “no reason” why he should not make trips to Germany and the Netherlands, two key EU members with whom Ankara had intense rows as they prepared for general elections in 2017.

Erdogan applauded Germany's leadership for “being on the same line” as Ankara by strongly condemning US President's Donald Trump's decision to recognize Jerusalem as the capital of Israel.

“All this is very gratifying,” Erdogan said.

Berlin was particularly incensed by the holding of several German nationals in a crackdown after the coup bid, although tensions have eased slightly following several releases in recent months.

However the correspondent of the Die Welt daily newspaper, Deniz Yucel, a German-Turkish dual national who was arrested in February, remains behind bars and not even a date for his trial has been set.

Erdogan indicated that the EU's support for his stance over Jerusalem, a cause he rapidly championed following Trump's bitterly-contested move, could be helpful in creating better relations.

He said he may visit France, without giving a time. “They (Paris) did not leave us by ourselves on this issue (Jerusalem),” he said.

Erdogan said a visit may also be on the cards to the Vatican to meet Pope Francis, who was also strongly supportive of his stance.