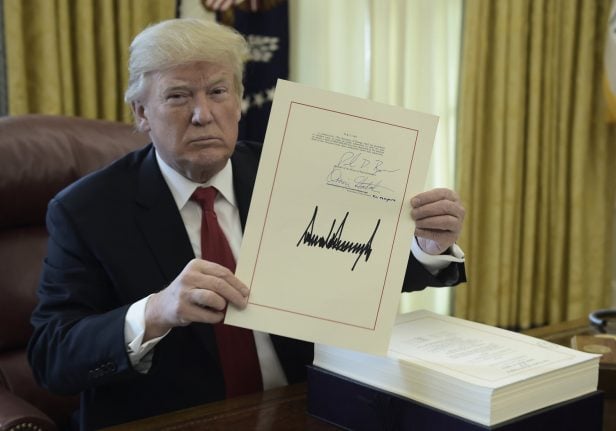 US President Donald J. Trump during an event to sign the Tax Cut and Reform Bill at The White House in Washington, DC on December 22nd 2017. Photo: AFP

The controversial tax overhaul signed into law Friday by billionaire President Donald Trump will slash the US corporate tax rate from 35 percent to 21 percent.

As a result, Daimler projected its net income to grow by around 1.7 billion euros ($2 billion) this year.

“The reduction of the federal corporate income tax rate… results in an income tax benefit increasing the net income of the group for the year 2017 by approximately 1.7 billion euros,” the company announced in a statement.

BMW also said it expected the tax changes to have a “positive impact” on its 2017 net profit, boosting it by between 950 million and 1.55 billion euros.

Trump this week celebrated his first major legislative victory since taking office a year ago as Congress passed the $1.5 trillion overhaul, set to impact every corner of the economy.

Making good on a vow to push through the tax cuts before Christmas, the 71-year-old endorsed the bill Friday shortly before departing for a year-end break at his Mar-a-Lago resort in Florida, pulling forward a formal signing initially planned for January.

Opposition Democrats have branded the tax plan a giveaway to the wealthiest that risks blowing a hole in the national debt.