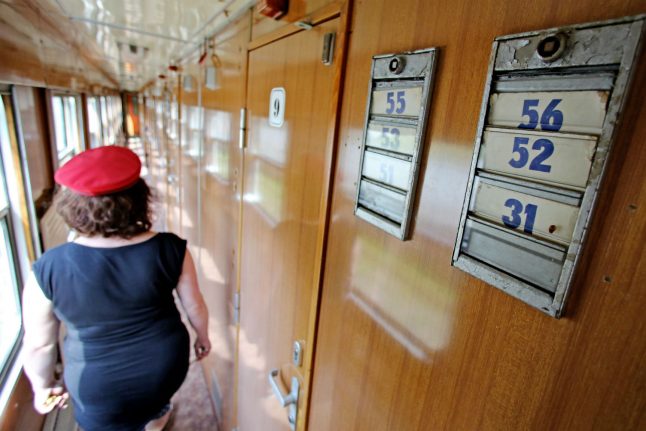 A sleeper that has been turned into a hotel in Saxony. Photo: DPA

In the early 1990s, as a twentysomething correspondent living and working between Berlin and Budapest, I journeyed so regularly with the overnight train that the Slovak coach attendant immediately broke into German upon recognizing me. “Ah, mein Herr!,” the uniformed little man said with an officious nod, for a moment transporting me back to a bygone age of European train travel. (This special treatment, however, didn’t release me from the small bribes necessary to obtain amenities – all part of the Central European night-train experience.)

The Hungarian-run Metropol departed Berlin’s Ostbahnhof just before 7 pm, pulling into Budapest’s gritty Keleti Station at around 8:30 am the next morning, making stops along the way in Dresden, Prague and Bratislava, among other, smaller towns. It was an adventure every time – a nocturnal passage through the heart of Europe on rails that linked the continent from St. Petersburg to Sicily.

In the six-couchette sleeper cars, your companions for the gently rumbling trip could be families, manual labourers working abroad, students, tourists, or even shady borderland traders. Although their nationalities and tongues were as jumbled as Mitteleuropa’s own ethnography, there was usually a convivial spirit of camaraderie in the berths: an implicit recognition that we were all in this venture together.  After all, there were those stories about pickpockets slipping onto the train in Bohemia – although they never crossed my path.

In pidgin English or German you’d chat and swap stories, as well as cheese sandwiches and salami. The car attendant sold Hungarian beer from a case, and a bottle of schnapps usually appeared, and then disappeared.

Shortly after leaving Dresden’s cavernous central station – the last time you’d hear German booming over the Bahnhof intercom – the beds would be clapped down from the compartment’s walls, made up with starchy sheets, the lights dimmed. In the morning you’d awake in southern Slovakia just before the Danube Bend where the river takes a sharp right-hand turn to the south into Hungary. The quality of the night’s sleep varied, yet first thing in the morning the attendant was up and brewing coffee and tea.

But the Metropol rides no more – the last leg ran on December 10th. The Hungarian rail company MAV claims the stretch isn’t profitable. The discount flights are a third of the price, buses are even cheaper.

The Metropol’s termination is just the latest of the scratched “moonlight” trains that previously stitched Europe together – and provided a low-carbon option to travellers concerned about the environment. This month, the nighttime Paris-Nice connection was also dropped. Beginning in 2014, night trains between Berlin, Paris, Amsterdam, Zurich, Warsaw, Krakow, Rome, and Stockholm were mothballed by Germany’s Deutsche Bahn and France’s national railroad company SNCF, which cited high costs, regulatory difficulties and falling popularity.

But transportation experts vigorously dispute that night rail travel has fallen out of public favour, as does Austria’s national railway service, which has not slashed its night services and indeed has even picked up some of the shuttered German lines, such as Munich-Rome.  It claims to turn a profit, despite the high costs.

“It’s completely absurd,” explains the German Green Party member Michael Cramer, a transportation specialist in the European Parliament. “The laws and regulations are stacked against the railways and in particular long-distance trains,” he says, noting rail taxes and other compulsory fees that railway companies must pay. Cramer points out that automobile, bus and air travel aren’t tithed in the same way, which makes them less pricey – unfairly so. Today, in the effort to sink carbon emissions, electric and hybrid cars qualify for rebates and other incentives – but not trains, underscores Cramer.

Cramer notes that the 2015 Paris accord on climate protection stipulates that the EU cut greenhouse gases in its transportation sector by 60 to 80 percent by 2050. “In order to remake transportation across Europe, overnight rail service, which is the one climate-friendly alternative to air travel, has to be maintained – and eventually expanded,” says Cramer, who is involved with protests and a petition against the measures, initiated by climate groups, labour unions, and citizen’s initiatives.

Since the 1990s, I’ve travelled many times on the Metropol, though not as often as I once did. This autumn I took my wife and six-year-old son to Budapest for a week of R&R in the steaming hot baths and the city’s grand old coffee houses. We booked one of the pricier three-bed compartments on the Metropol, which we had to ourselves. My son was thrilled beyond words. I told them a few stories from back in the day when communist East German, Czechoslovak, and Hungarian border guards would wake you in the dead of night, shine flashlights in your eyes, and demand passports and visas.

Today’s borderless Europe is immensely preferable. But it’s less tightly knit than a few years ago as a consequence of the long-distance trains’ demise. Next time we visit Budapest from Berlin, I suspect we’ll fly. There’ll be nothing special to remember about the trip itself, unless of course the flight is hours off schedule.

Paul Hockenos is a U.S., Berlin-based journalist and author of Berlin Calling. A Story of Anarchy, Music, the Wall and the Birth of the New Berlin (The New Press).