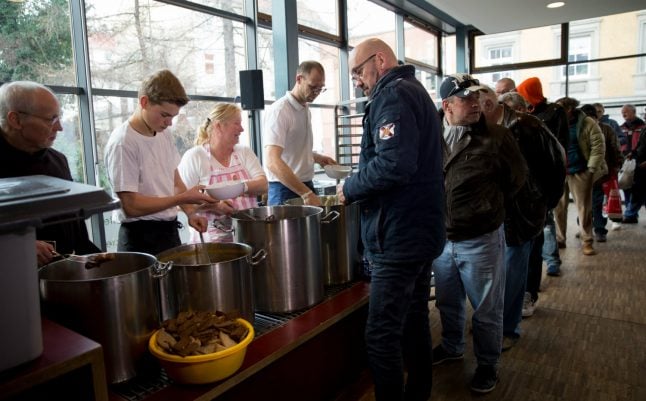 If you want to do something good and improve your German, Freunde alter Menschen (Friends of the Elderly) organizes Advent cafes and Christmas dinners for lonely elderly people, who might otherwise spend the festive period isolated and alone.

The organization works in Cologne, Hamburg and Berlin, running Advent cafes during December and two Christmas dinners either on Christmas Eve or the big day itself.

Each guest receives a roast dinner, a present, and company on a day which can be difficult for those whose families don't live nearby or have passed away.

If you're interested in helping out at one of these dinners, visit their page to see how you can get involved.

Friends of the Elderly also provides a telephone service where lonely pensioners can sign up to receive calls from volunteers and get some much-needed chat time. But if your German leaves a bit to be desired, then you can always contribute online towards the meal or present fund. If you still haven’t finished your Christmas shopping for the year, not to worry, there's still time. There are also plenty of ways to incorporate being charitable into your list.

You can check out charity shops for gifts, particularly if you're buying for vintage clothes fans, or if you're stuck with a hard-to-buy-for secret Santa, you can always sponsor an endangered animal on the person's behalf.

You could even sponsor an underprivileged child through websites such as SOS Kinder Dörfer, and “give a child in need a future”.

If you're already getting started on writing Christmas cards, you can always stock up for next year in a charitable way by going to a site like Alle Karten and browsing through their selection of cards which profit a range of charities with each sale.

Help out at a soup kitchen A volunteer serves soup at a food bank in Wiesbaden. Photo: DPA

A sure-fire way to spread the festive spirit is to help out at a soup kitchen or Tafel (the German word for food bank) this Christmas, although be warned you might spend part of your day being bossed around by a slightly intimidating but well meaning old German lady (as happened to one of The Local's reporters).

Many charities also use Facebook to advertise their events – so get searching. You can also check with your local homeless shelter to see if they need any helpers or food donations. For example, anyone in Berlin should check out the Obdachlosenfest which offers a Christmas meal to homeless people every year and can always use donations.

It's also worth remembering that many homeless shelters are often inundated with volunteers around the festive season, but the rest of the winter, and the year, they struggle to find helpers, so perhaps make it your new year's resolution to carry on helping out even after the festive season is over. Photo: Wikimedia Commons
Given the incoming influx of new clothes from presents and the post-Christmas sales, it might be time for a clear out of your old garms.
Familiar face Oxfam has a wide presence in Germany, with 52 stores across the country, but there are also numerous other independent and chain charity shops countrywide. So bag up your old stuff and make your way over this festive period.
Volunteering in a charity shop is also a great way to get some experience speaking German without the pressure of a paid work environment.
Germany also has a good number of fair trade shops such as Contigo, carrying arts and crafts products made from cooperatives around the word.