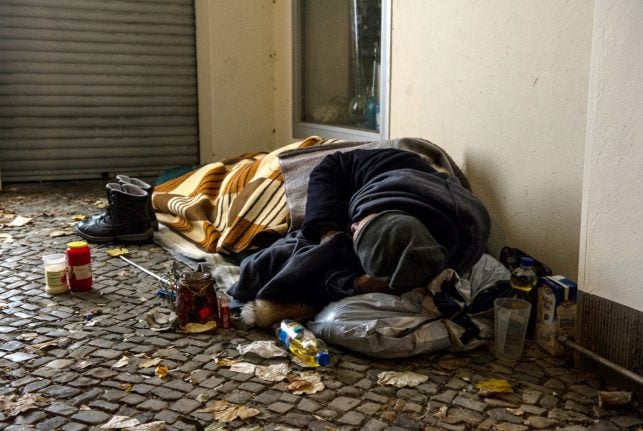 One of the first things you need to survive on the streets is a “bunker”, says Klaus. In this bunker you can hide your possessions during the day, he explains. It could be a hole in the ground or among the bushes, it doesn’t matter really – the key thing is that absolutely no-one knows where it is.

Possessions stashed, he could spend the day collecting bottles. Klaus, who speaks eloquently in fast colloquial German, is a slight man, with chunky walking boots that look heavy on his legs. He used to walk a set route in central Berlin targeting busy areas like Checkpoint Charlie where tourists, unaware of Berlin’s “pfand” recycling system, would leave accidental tokens of survival in the city’s bins.

“Two bottles were a bread roll,” says Klaus. But the trade was unpredictable – and often competitive. Some days after a 6am start he would be done by midday. Others he would make only enough to cover the alcohol he needed, and would have to visit a soup kitchen for a little food.

The homeless in Berlin, like many big cities, are too often parts of the urban furniture – both familiar and unknown – written about mostly when the temperature drops. In Berlin, while there are no accurate statistics on who and how many they are, there is recognition it is a growing problem. Estimates are now at between 8,000 and 10,000. Camps of tents are creeping out around parks and stations.

Some Berlin districts have recently offered to pay to bus Polish homeless people back across the border. And people sense the demographic changing: more women, more young people, more families.

Invisibility was Klaus’ strategy. He saw himself as a “little grey mouse”, quietly navigating the city without notice, taking just what he needed to get by. He even kept his homelessness a secret from family in the city. On Tuesdays and Fridays, he looked for discarded train tickets to visit a shelter with a shower and washing machine.

Life was a delicate dance between shame and survival: he needed to look clean enough that supermarket staff wouldn’t turn him away when he traded his bottles, but not so smart he looked odd reaching into a bin.

Finding a corner of the city to sleep in was also a careful calculation. Most people stay in groups – for safety, Klaus explains. After first arriving in 2002 he too had found a group, but fighting and alcoholism led him to try and make his way as a “loner”.

Klaus soon discovered that Tiergarten – the large park in the centre of town – wasn’t safe for a loner. It was then he found a small wooden house in a children’s play park. He needed to be discrete: he arrived after the canoodling teenagers went home and woke up before the local children arrived.

But it was practical: near his bottle collecting route, close enough to police should the “neo-Nazis” from Tiergarten come by, and the wood kept his body a meter above the frost. When it got really cold he stuffed newspaper under his clothes.

“When you first hit the streets you're scared, but you lose the fear quickly,” he says. “You focus on surviving. In the shelters, you could see pictures of people with black marks crossed over their faces. I knew two people personally who didn’t survive the winter. ” A room for the night

At the Kältehilfe centre, the guests who are still awake are getting ready for bed at 9pm.

“It’s early,” explains Jo*, who works there. “But people are tired after a day on the street.”

There’s been sleet this evening and the place is busy. Rows of people side-by-side on mattresses are already asleep. It’s a tight squeeze among those waiting for the bathroom, and there’s a cheerful atmosphere.

This shelter is one of the many across the city that open up from November until the end of March. “It is very basic,” says Jo. “People can shelter from the cold, wash, and get a hot drink. Doors open at 7pm and people leave by 7am the next morning.”

In Berlin, soup kitchens, night cafes, medical care centres, and mobile warm-up buses help to expand support during the cold months. According to Karin Rietz, spokesperson at the Berlin Senate's department for integration, labour and social affairs, available beds increase from 140 in the summer to 1,100 in the winter.

The city’s provision network is relatively strong – a range of welfare and religious organisations are involved, with financial support from both the Berlin Senate and donations. But demand is increasing.

“Our aim is to build up the support structure,” says Rietz. “For example, 100 more beds will be created to accommodate homeless families.”

On these evenings, Anna*, Jo’s colleague, hears familiar stories – losing jobs, then partners, and then houses: “You hear how people’s lives fall down like a house made of cards.”

Working here brings societal misunderstandings into sharp relief. “Many of these people care what they look like,” says Anna. “They want to be clean and treated with respect. They are intelligent people….But there is this idea that it is their own fault: that they don’t function, they are not strong enough and they don’t want to be helped. This just helps people comfortably ignore the problem.”

There are also organisations and shelters in Berlin that provide more structured support, including advice and debt counselling, and access to social workers. In theory, you know there is help if you want it, says Klaus. Yet there are as many misunderstandings about why people end up on the street as there are about why it is difficult to get back off it.

“People think it is just about drink or drug addiction,” he says. “But it is more complicated. Usually people have become overwhelmed with their lives, and then it is a slippery slope.”

It is a ratchet both psychological and bureaucratic. “Many people don’t have personal identification or an address to post things to,” says Klaus. “And without insurance, you can’t go to the doctor. The bureaucracy is so intimidating and complicated and you feel like you are a lowly beggar. The longer you are on the street, the more it feels like you are asking help from aliens in another world.” The Kältehilfe in Berlin. Photo: DPA

Turning corners in a changing city

Just as there was a tangle of events that led to Klaus crossing into this “other world” – conflicts with his employers in the agriculture industry, alcoholism, the lure of the big city – there was a sequence that triggered the long process of return: the family who “adopted” him after their child discovered him and insisted on bringing him breakfast, the cold winter of 2007 he didn’t think he would survive a repeat of, his friend who “held a pistol to his chest” to move in with him and turn a new corner.

Back at the homeless shelter, Jo sees the backdrop of mounting social and economic pressures behind the tales of those that come through the door. A report earlier this year from the Equal Welfare Association claimed Berlin, alongside the Ruhr region of North Rhine-Westphalia, was a hotspot of mounting poverty in the country. “We don’t often talk about poverty in Germany,” says Jo. “But many live in precarious conditions… People are becoming overwhelmed and overburdened.”

While Germany distinguishes between those that are wohnungslos (without a place of their own, staying for example on sofas or in homeless accommodation) and obdachlos (living on the street) – the trend of increasingly precarious housing is clear. In 2016 nationwide, 422,000 were living without housing in Germany, up from 335,000 in 2014, according to BAG Wohnungslosenhilfe. Meanwhile, an estimated 52,000 people were living on German streets, an increase of a third within two years.

Anna points to four new luxury housing blocks that have sprung up outside the homeless shelter, which, she adds, a local woman mistakenly believed were for refugees. Housing in Berlin, a city once known for cheap rents and empty flats ripe for squatting, is becoming scarce and unaffordable.

In 2017 Berlin ranked first place in Europe for real estate investment for the third year in a row by PricewaterhouseCoopers. The social housing stock in the city has steadily decreased over the last two decades: with over 70% of housing now in the private sector.

Despite attempts at rent control, in Berlin average rental prices have jumped almost 10% in the last two years. In areas like Neukölln, all the familiar shorthands for gentrification – trendy cafes filled with MacBooks and avocado smash – sit alongside the long-standing Turkish breakfast places. Anger at the rising rent prices can be read in the graffiti scrawled on the walls.

Anne Murphy, a resident of Neukölln, has heard more stories of forced evictions over the last year and seen two things she hadn’t seen before in the area: queues around the block for a flat viewing, and groups of people regularly sleeping in U-Bahn stations.

While you can’t draw a direct line of causality between gentrification and homelessness, the rising rents in Berlin are definitely part of the problem, says Professor Sebastian Schipper, academic at the Free University in Berlin.

“Inhabitants are going up in number while the number of housing units does not keep up with the population growth,” says Schipper. He notes the young people moving from places like London and Tel Aviv where housing has already become very expensive, the refugee situation, migration from places like Spain and Greece with young people looking for employment, as well as from other places in Germany. It is estimated Berlin has 40,000 new inhabitants per year.

Yet there is often a misleading focus on hipsters, says Schipper: “Much more powerful are the investment strategies of different kinds of financial actors trying to make a profit in Berlin.”

Rietz from the Berlin Senate says that the city is actively working to counter the problem.

“Our government in Berlin is trying to give more support to people on lower incomes and without housing,” she says. “In November we introduced a new measure – AV-Wohnen – to increase the amount of welfare money for housing. And the plan in Berlin is to build more social housing. But you can’t manage this overnight – it takes time.”

Schipper argues that while the Berlin government is now doing a relative amount to try and secure affordable housing, their power is limited when it comes to the private sector. “And at the national level there is little representation for tenants’ rights,” he adds.

Where Klaus lives today, in an area a little outside the centre, he sees more and more people sleeping on the streets: growing groups beside bridges, in parks, outside local shelters.

The little wooden house where he once lived is now gone. On the patch of grass beside where it stood Klaus begins the tour he organizes with Querstadtein, an organisation raising awareness about life on the streets of Berlin. In a city that everyone wants a piece of today, Klaus tells his story of the eight years he spent as a “little grey mouse” in its crevices.

As the city’s property boom rolls on, Klaus is looking ahead to the New Year. He’s hoping to get his “Homeless Parliament” project up and running. “Without proper statistics about homeless people, they are easy to dismiss as a political issue,” he says. “We want to change that. We need a voice.”

*Names have been changed.