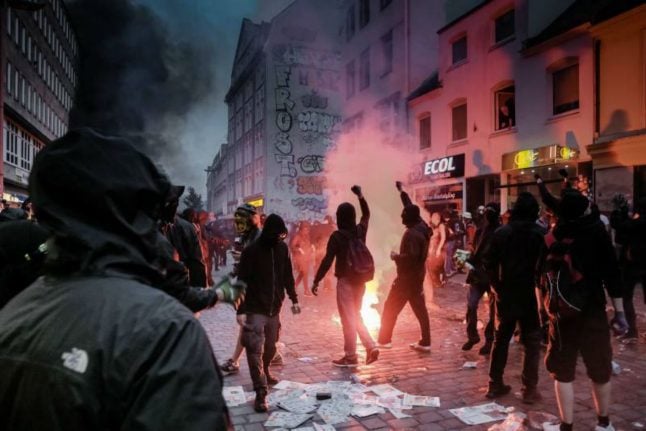 Riots during the G20 summit in Hamburg. Photo: DPA.

On Sunday evening, the photographs of 54 Berlin police officers who are believed to have taken part in evacuating homes during the G20 raids were published on the internet platform indymedia.org.

“We would be pleased about tips regarding where they live or can be met privately,” the platform authors wrote, adding that the police are to blame for the violence during the summit.

After they saw the photos and the threats posed at police officers on the website, the German Police Union (GdP) described the threats as “abominable, defamatory and the result of a fundamental attitude that glorifies and exerts violence.”

The GdP spoke of a danger posed by “left-wing extremist terrorists” who “stir up hatred,” adding that “this must be stopped and done quickly and sustainably.”

More than 100 photos and videos taken of suspected perpetrators lighting cars and looting shops have been made available online by the Hamburg police as part of their investigation, reports Die Zeit.

Despite the deployment of 20,000 police officers during the G20 summit, heavy riots took place in the Hanseatic city in July and hundreds of people were arrested.

But the authorities were also accused of misconduct; right after the summit, dozens of investigations were launched examining police behaviour including alleged assault.

In November authorities in Hamburg faced accusations of abuse of power during the summit, with German media reporting they used a banned combat weapon to fire on rioters.

Linksunten.indymedia.org – part of the indymedia.org network and an influential internet platform for the militant left in Germany – was banned by the Federal Interior Ministry in August.