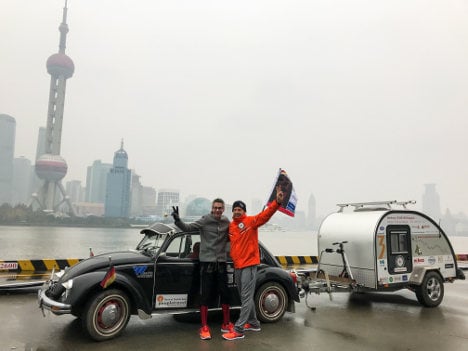 Troubled by what he sees as growing bigotry and division in the world, the German management consultant gave up a successful business to run the ancient Silk Road from Hamburg to Shanghai in a Quixotic quest to show that we are all one.

“OK, the world is turning crazy, you have to do something,” the 45-year-old said.

“If I want to talk about prejudice, I'm nobody, who will listen to me? So I thought about what I could do to wake up some people.”

Others have driven or biked overland from China to Europe. But Markus, whose wife is Chinese, could find no one who had run the route from sea to sea.

“Why not connect Europe and China along the Silk Road, which is in all people's minds at the moment?” he said, referring to Chinese leader Xi Jinping's promotion of a revived east-west trade and cultural corridor.

But Markus — who won't specify his politics to avoid riling sponsors — is not a runner, and he got far more than he bargained for on an odyssey chronicled via Instagram, Facebook and his website runmysilkroad.com.

Markus set out in March followed by friend Victor Neubauer, who drove a black 1984 Volkswagen Beetle towing a camper-van stuffed with protein powder, thousands of nutritional supplement pills and other supplies.

He ran in a freezing Russian spring and 52-Celsius heat (125 Fahrenheit) in China's Taklamakan Desert, through painful shin splints and stomach ailments, and four dozen pairs of running shoes.

Markus once ran through the night in a Chinese sandstorm when there was no accommodation available, and he nearly turned back several times when unforeseen costs or suspicious border officials blocked the way.

“They check more because we came in with a fancy car and a stupid idea,” he said.

The first time he heard his now 18-month-old son say “Daddy” was on a bittersweet video call.

Halfway through China, their faithful Beetle's exhausted engine finally died. The car's corpse will be shipped back home.

Then, in late September, a freak stumble while running in China's central Hubei province broke both of Markus' heel bones. The incident made Chinese state news broadcasts, sent some sponsors fleeing and seemed like the end.

“But that's not my style, and Victor, that's also not his style,” said Markus, who spends most of his time in a recovery wheelchair.

With Neubauer gamely stepping in to run, they continued with a mix of running and other transportation, but only after the mulish Markus insisted on having his foot surgery in China, resisting family pressure to return home because he felt it would betray the spirit of his “culture bridge” run.

The generosity of strangers kept Markus going, like the poor Belarus couple that slept on their sofa so the Germans could have their beds.

“No German would do that,” Markus said.

There were the imposing Russian police who pounded on their door one night, only so they could lead them to a safer parking spot for their camper van.

There were countless offers of accommodation, meals, supplies, and many eager conversations with locals about the world.

Pictures from March show Markus with far more pepper in his now salt-and-pepper hair, but he has no regrets.

“Most importantly, (the run) brings us closer together. In a world like we have now, I think we need many, many more projects to bring people together instead of (separating) them,” he said.