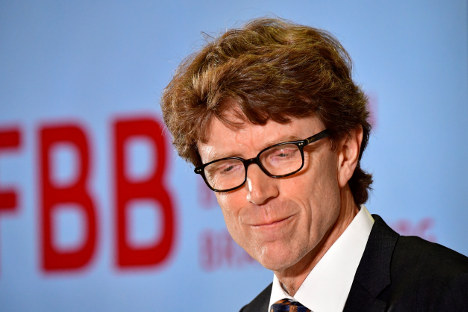 Planners said after a committee meeting they were confident they now had a viable roadmap to address the technical defects that have plagued in particular the ultramodern new main terminal of the BER airport.

“With today's supervisory board meeting we are starting the last phase of the completion of the terminal and thus of the opening of BER,” airport chief Engelbert Luetke Daldrup said.

Daldrup called the new opening date target of October 2020 “credible and reliable” but acknowledged that the six-billion-euro ($7.1 billion) price tag would, as widely expected, continue to rise.

Supervisory board chief Rainer Bretschneider said in a statement that the new deadline would lend momentum to the efforts to address outstanding technical problems.

“Now we need to win back lost trust,” he said.

The BER airport was set to open in 2012 but has become a planning disaster and a running joke for Berliners, while tarnishing Germany's reputation for engineering prowess and punctuality.

The troubled project has sparked repeated disputes between the capital city Berlin, its neighbouring state of Brandenburg and the federal government, as well as with architectural and engineering firms involved.

The airport's construction, which started in 2006, has been marred in particular by serious flaws with the fire safety and smoke extraction systems, as well as problems with the roof of the sprawling main terminal building.

As the site sits empty, support has grown to keep open the smaller Tegel airport it is meant to replace.

Berliners voted in September to keep open the Cold War-era facility, which has long been marked for closure.

The referendum was not legally binding, but it heightened the political pressure in a protracted dispute which many locals wonder whether they will ever see the end of.