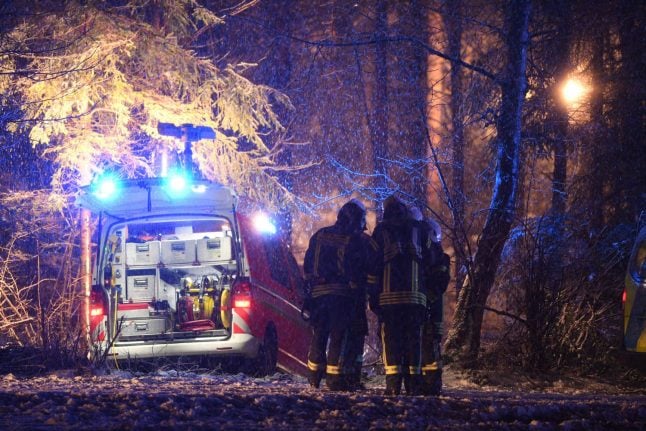 Rescue teams at the crash site. Photo: DPA
After a small aircraft crashed in an inaccessible part of Baden-Württemberg on Thursday in poor weather conditions, rescue teams worked through the night to try and access the site of the accident.
By Friday morning a police spokesperson confirmed that three people had died in the crash. Two of the victims came from Austria, while a third was German. The 45-year-old pilot of the plane came from Vorarlberg in Austria, one of the passengers was a 45 year old man from Vienna. The third victim was a 79 year old from Lake Constance.
The Cessna 510 plane took off from Frankfurt-Egelsbach airport in Hesse in the direction of Friedrichshafen, but never reached its destination. Instead it crashed in an inaccessible forest in the Ravensburg district of the southern state.
Rescue efforts were hampered by wind and heavy snowfall, with work temporarily stopped due to the conditions at one point in the night.
Already in the evening, the emergency services had closed off the accident site and illuminated the forest with searchlights. Experts from the Federal Aircraft Accident Investigation Bureau were looking for clues that could provide information about the identity of the victims.