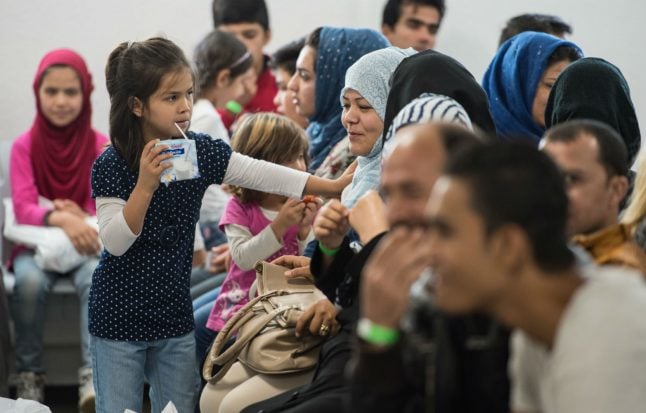 How many asylum seekers are there in Germany?

Since 2011, the year that the Arab Spring destabilized many Middle Eastern countries, around 1.6 million people have applied for asylum in Germany. To be exact 1.55 million first-time applications were made between 2011 and 2016, with over half of those applications coming in 2015 and 2016.

Not everyone who wants asylum is accepted – in 2017 some 39 percent of all applications were turned down.
According to the Institute for Employment Research (IAB), there are currently 600,000 people living in Germany who have been granted protection. Two thirds of these have full asylum and a third have a lesser form of asylum known as subsidiary protection.

But that isn’t the whole story. The vast majority of those who have their applications rejected stay anyway. At the end of last year some 556,499 people were still living in Germany despite being turned down for asylum. Four out of five of these people had been in the country for at least six years.

Do many asylum seekers actually come to Germany for economic reasons?

Although people on the left of the political debate call people who arrive in Germany from the developing world Wirtschaftsflüchtlinge (economic refugees), German law does not recognize poverty as a reason for granting asylum.

The CIA estimates that there are currently 4.1 million people within Iraq who have been displaced by violent conflict among the country’s ethnic communities. In Syria, the UN estimates the death toll from the civil war at roughly 400,000 people. A large proportion of applications in 2016 were also made by Afghans (17.6 percent), while Iranians (3.7 percent) and Eritreans (2.6 percent) applied in the fourth and fifth largest numbers. The US State Department has criticized the human rights records of all of these countries.

Still, there is anecdotal evidence that some people lie about their reasons for leaving home, such as the recent case of a man on trial for murder who told German authorities his father died fighting the Taliban in Afghanistan. Prosecutors found out that the father was alive and well in Iran.

German authorities appear to be aware of this possibility, spending more time considering cases from countries where there is no civil war. While a Syrian waited four months on average for a decision in 2016, Eritreans had to wait nine months and Iranians 15 months.

Nonetheless, whether authorities are any good at spotting a fake was called into question in dramatic fashion early this year. When a German soldier was arrested for plotting a far-right crime that he wanted to pin on refugees, it emerged that he himself had submitted an asylum application and gained asylum by posing as a Syrian refugee – despite speaking no Arabic.

The Federal Office for Migration and Refugees (BAMF) did not respond to a request from The Local to provide information on the number of asylum requests which are deliberately deceptive. But the fact that 39 percent have been turned down this year suggests BAMF believes that roughly four in ten people come to Germany who aren't refugees according to the legal definition.

Does the German government spend more on refugees than German citizens?

In 2015 Germany spent around €16 billion on refugees, that is 0.5 percent of GDP.  This is significantly more than the 0.01 percent of GDP the US spent on its refugee programme in the same year, but less than the 1.35 percent of GDP spent in Sweden.

Last year the federal government also agreed to give the 16 federal states an additional €8 billion until 2018 for the integration of refugees.

This is obviously a very substantial amount of money and the government has been criticized for its reluctance over years to invest in public infrastructure before pulling an extra few billion out of the hat to spend on refugees.

As for social welfare, the payments refugees receive are complex and depend on the status the refugee has. There are no circumstances though, in which refugees have more rights than Germans.

When refugees first arrive in the country they are entitled to expenses “which cover their basic needs.” Local authorities can decide whether this is given in the form of food and clothing or whether refugees are given a small amount of money.

Refugees living in refugee homes are also entitled to “pocket money.” For single adults this is €135 per month. For couples this is €122 each. Parents also receive between €79 and €83 a month, depending on the age of their child.

All of these payments are lower than the base welfare payments to German citizens. An unemployed German is given €409 per month as the lowest rate of welfare. Meanwhile German parents receive child benefits starting at €192 per month.

When someone is given full asylum and they live independently, they are entitled to the same benefits as German citizens. This right is enshrined in the German constitution.

Are refugees capable of integrating into the job market?

A survey of over 70 percent of adult asylum seekers in 2015 showed that education levels vary widely from country to country. While three quarters of Syrians arrived in Germany with at least a high school education, more than half of respondents from Afghanistan had only been to primary school at best.

Germany does not collect job figures on refugees. But statistics for citizens of the eight most significant countries of origin for refugees give approximate data. This shows employment levels much lower than among the general population. Whereas just five percent of Germans were unemployed in September, 45 percent of people from these eight countries were not in employment.

The Federal Job Agency notes that “poor language skills and a lack of formal training make it difficult for refugees to integrate into the job market”, warning that “a deep breath is needed” in overcoming these problems. The good news is that the proportion of refugees who are registered as unemployed dropped by 7.4 percent in a year (although most of these people have gone into further education courses rather than employment).

German employers who have hired refugees have been pleased with the work they have done. An OECD survey carried out earlier this year with over 2,000 employers found that around 80 percent were satisfied with the work done by refugees in their employment.

There is also clearly a desire on the part of refugees to find employment. A survey by BAMF in 2016 showed that 86 percent of male refugees and 60 percent of female ones said they “definitely want to work.”

Will refugees stay in Germany for good?

A survey of refugees conducted in 2015 showed that 85 percent of all respondents wanted to stay in Germany indefinitely. Afghans and Iraqis were most likely to say this, with Syrians being relatively more likely to say that they weren’t sure what they would do in the future.

But being able to stay isn’t just dependent on the wishes of the individual. The Integration Act, brought in in 2016, tightened the rules for gaining permanent residence. If refugees have A2 level German and can for the most part support themselves financially they should be able to gain permanent residence after five years in the country.

The situation is more complicated for people who have been offered subsidiary protection. People granted this lesser form of asylum are given a residence permit for one year which can be extended for a further two.

Whatever the rules are though, Germany only deports a fraction of the people who have their asylum requests rejected. Figures from last year show that, of the half a million people still living in Germany who had their requests rejected, 39 percent had been here longer than six years. Meanwhile almost half of this number have been given an “unlimited right of residence”.

The questions of whether Familiennachzug (family reunifications) should be allowed for the 200,000 people who currently hold subsidiary protection status was one of the sticking points that brought down the first attempt at building a German government this autumn.

As things currently stand, people with subsidiary protection don’t have the right to family reunifications. That is up for review in March, though. The Green party were adamant that these refugees should be allowed the chance to bring immediate family to Germany. But the conservative Christian Social Union (CSU) disagreed – fearing that a second wave of migration would further erode its support base.

In fact, research by the Centre for European Policy Studies (CEPS) suggests that allowing family reunifications would have a minimal effect on overall refugee numbers, with only 50,000 to 60,000 more people coming to Germany as a result. This is because many people with subsidiary protection either already live with their families or are single adults who have no “direct” family as it is defined by German law.