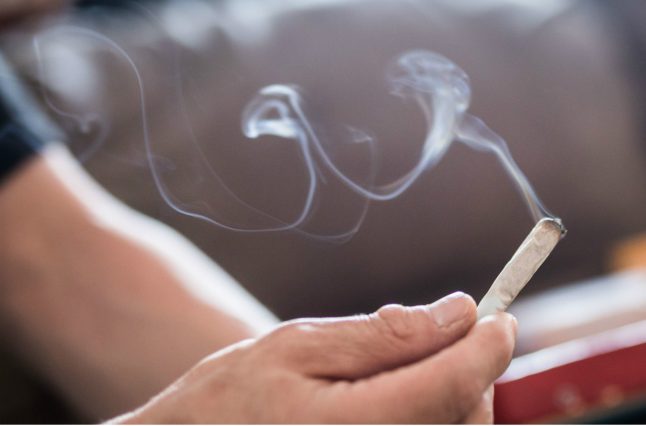 Police in Munich rendered a man's cannabis unusable, after searching and insulting him, despite the fact he had official dispensation to use the drug for medicinal purposes, the German Hemp Association reported on Monday.

Christopher N. is a cannabis patient with access to the drug, which is normally illegal in Germany, through prescription.

This means he can possess and use cannabis for medicinal purposes without fear of being punished. Or at least that's what should happen.

But when the young man was stopped by the police while smoking a joint on the banks of the Isar river, they didn't seem to care that he had official permission.

The plainclothes officers reprimanded Christopher, subjected him to a body search and insulted him.

READ ALSO: Six things to know about weed in Germany

“The police instructor ignored the narcotics prescription I carried with me, called me a 'junkie' and searched me and several innocent bystanders,” the cannabis patient told the German Hemp Association.

The police discovered one unit of cannabis leaves in Christopher's possession, around 0.3g, which was immediately confiscated and destroyed.

Only then did the man have the chance to show his official documentation in the form of his prescription and the pharmacy label on the packaging which was printed with his name.

Though the incident took place in May, proceedings have only just come to a close as the Munich prosecution office has now instructed the police department to reimburse the man €6.60, the cost of the destroyed cannabis.

“After the incident, I was scared for weeks and only decided quite late to file a complaint,” said Christopher N.

The Munich police headquarters responded to the official complaint and the incident was reviewed by the Bavarian Department of Internal Investigations due to suspected insult by the officers.

It was confirmed by the Munich prosecutors office that a defamatory insult was used but, as the officer was not viewed as likely to repeat the incident, no punishment was deemed necessary and legal proceedings were stopped.

The police search of the man and those accompanying him was also deemed lawful in principle, as it is took place in a “dangerous area” where people are often caught illegally smoking cannabis.

But Christopher N. does not believe this excuses the officers' behaviour.

“I don’t want to accept that patients will be collateral damage in an already constitutionally questionable hunt for cannabis consumers, and according to the desires of officials should permanently hide in their homes or have to undergo regular body searches,” he said.

“The fact that this medication is also being destroyed, is unacceptable, considering that the supply hasn't been guaranteed for months in pharmacies.”

Christopher N. plans to donate the money he received to the German Hemp Association.

A spokesperson for the Munich area branch of the German Hemp Association hopes that in the future cannabis patients will be treated differently.

“From all this, it should be clear to the Bavarian police that cannabis patients are not criminals. If any further patients are affected by something like this, they are welcome to contact us.”

SEE ALSO: How patients in Germany are still struggling to get cannabis despite loosening of law