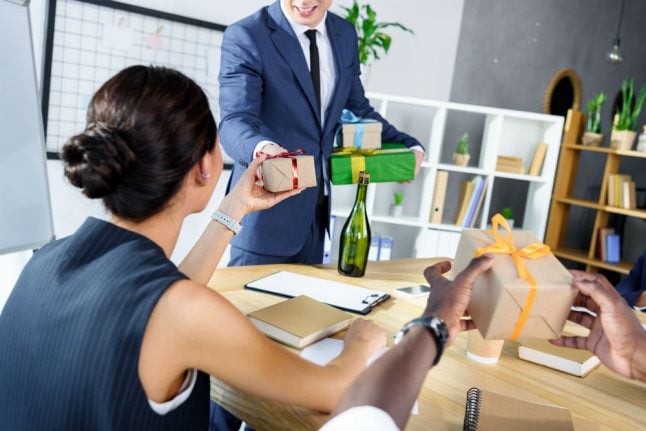 An employee handing out presents to his colleagues. Photo: Deposit Photos.

Nowadays it’s not just bankers, politicians or executives that have to be particularly careful when receiving gifts, but also everyday employees.

According to the German Bar Association (DAV), the legal maximum value of a gift is not specified in the German criminal code. So how is one to know whether to accept a present or decline the gesture in fear of corruption or being accused of accepting bribes?

Ask when in doubt

Companies decide for themselves the extent to which employees are allowed to accept gifts. This can range from an absolute ban on gifts to a very generous reception of them.

Allianz insurance group, for instance, states in its corporate code of conduct that an approximate upper limit of a gift value is a range of between €20 and €40.

“In the German stock index and in other large companies there are so-called compliance regulations with regards to gift giving and receiving,” André Kasten, a lawyer specializing in employment law in Berlin, told Spiegel Online.

For Nathalie Oberthür, a labour law lawyer based in Cologne, employers must set a framework. “If the employee does not know this framework, he or she must ask company superiors,” she told the DAV.

Generally speaking, gifts at a maximum value of €10 or €15 are regarded as pure courtesy, Oberthür added. But this can also be problematic, especially in areas of work where corruption is more likely to take place, such as in purchasing.

“Gifts from certain customers could lead to conflicts of interest for a buyer in a company,” Oberthür said.

Those who are doubtful with regards to declining or accepting presents should not only inquire with their superiors, write DAV on their website. These employees should also ask themselves whether accepting the gift changes the business relationship.

What’s the worst that can happen?

“Giving gifts in return for an official act may constitute a criminal offence,” says Oberthür. The line between courtesy and bribery is narrow, especially with regard to gifts involving entertainment such as concert tickets, the lawyer added.

The lawyer furthermore states: “Breach of the guidelines can lead to a warning and in serious cases to dismissal.”

“If an employee is proven to be corrupt or even suspected of being corrupt, he or she may be dismissed without notice.”

A classic situation in the workplace, Oberthür explains, is accepting expensive tickets for sporting events such as football matches. “This usually don't cost the gift givers anything if they already have season tickets,” the lawyer says, adding that it could still look bad though as employees may not be able to make impartial decisions afterward.

Where can I find the rules that apply to me?

Employees should find out for themselves about current gift-giving practices in their company at the beginning of an employment relationship, or at the latest with the first gift from a business customer, states the DAV.

Since the Siemens corruption affair surfaced in 2006, in which superiors in the international manufacturing company were accused of bribery, most companies have now clearly structured and formulated their internal compliance guidelines, added the DAV.

Public officials such as judges, civil servants, notaries and employees working in public administration are not allowed to accept any gifts at all – this is regulated by the criminal code in Germany.

In spite of these clear rules, legal disputes about what is allowed as a gift and what is not come up time and time again.

In spring last year, a teacher in Berlin had to pay a fine of €4,000 for accepting an expensive gift – a sculpture worth about €200 – from one of her high school students.

What about gifts from my boss?

In general, gifts from one’s employer can be accepted up to a monthly value of €44, and gifts for personal occasions such as weddings the acceptable limit is €60, says Oberthür.

The lawyer warns though that accepting presents from one’s boss could lead to complications, particularly in terms of taxes.

But colleagues giving presents to other colleagues is less problematic as this is usually classified as a private and not an official present.

Do I have to declare the gifts on my taxes?

“If the tax gift limit of €35 has not been exceeded, the gift to an employee at another company is not subject to taxation,” tax consultant Wolfgang Wawro told Spiegel Online, explaining that this type of gift is “person-oriented” and therefore cannot be considered a gift to the company. But higher amounts must be included in one’s tax return, he warns.

Those who work on a freelance basis have it easier in that they can accept gifts from clients, though not always implicitly, Wawro says. Only presents with smaller values do not have to be declared as operating income – the tax exemption limit is about €10.