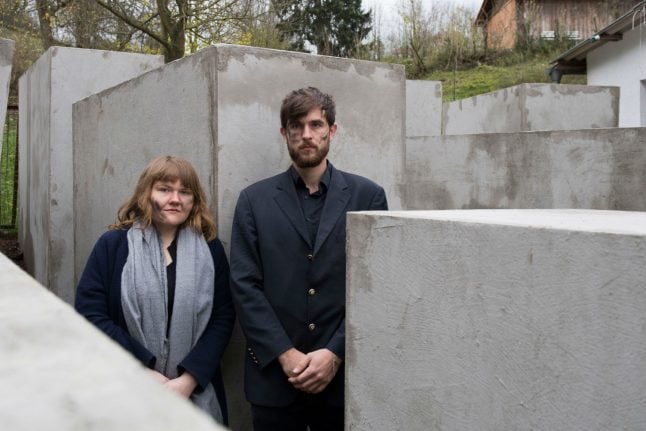 “We have done a DNA test on Höcke and the result is shocking: Höcke is a Portuguese immigrant with ancestors in Brazil, Portugal, France and Poland. He is not an ‘original German’”, the Centre for Political Beauty (ZPS) tweeted last week.

It was the latest stage in the artists' campaign against Björn Höcke, a senior member of the populist Alternative for Germany (AfD) political party. The artists would not say how they obtained Höcke's DNA, revealing only that the tests were carried out in Austria where it is legal to conduct such a test without the consent of the person to whom the DNA belongs.

One possibility is that the artists obtained the DNA after rummaging through Höcke's bins, something they have admitted to doing as part of their campaign of “using Nazi methods against the Nazis”.

Around ten months ago the artists quietly rented the house next door to Höcke's in the small east German village of Bornhagen. They then started acquiring information on him. While they have remained evasive on the details, they have admitted to stealing his paper waste bin and claim they now “know everything about him and can end his political career”.

As well as spying on the former history teacher, they have also built a miniature version of the Berlin Holocaust memorial in the garden and threatened to release compromising information if Höcke did not bend down in front of it and beg forgiveness for the Holocaust. This threat caused state prosecutors in Thuringia to get involved, suspecting the group of “attempted compulsion”.

The artist collective's exact motives remain unclear. On the one hand they say they are purposefully using morally reprehensible behaviour to prove a point against a politician they accuse of pursuing a secretive Nazi agenda. On the other hand they have described themselves as a “civilian intelligence unit”, arguing that their actions are justified by a failure of the state to watch over the firebrand politician.

Höcke himself has called the group “terrorists” and has claimed they have been stalking his family. “Maybe one day Björn Höcke’s house will burn down and then four innocent children will be among the dead”, he said theatrically, in a recent speech.

The artist collective's behaviour has been so controversial that Höcke has found strange allies in his battle, including the left-wing minister-president of Thuringia, Bodo Ramelow.
“Political demonstrations in front of the private homes of politicians in unacceptable,” Ramelow told Tagesspiegel. “Personal space needs to be protected. The tone in which this has been conducted, the way in which the artists have placed a whole village under suspicion of being Nazis, makes it hard to see what is art and what is simply a political stunt.”
“The victims of the Holocaust have been forgotten in this whole show – that is extremely regrettable,” he added. Björn Höcke. Photo: DPA
Not everyone in Germany agrees that the artists have gone beyond the pale, though.
“It is dull to compare the Centre for Political Beauty's actions to Stasi methods – the serious threat posed by a powerful state against dissidents is completely different to artists' surveilling the representative of a party that is an enemy of democracy,” wrote Spiegel columnist Georg Diez earlier this month.
“Artists need to act in a volatile world in which the state and the media often don't do their job well enough,” he argued.
Those who have sought to justify the artists' actions have often pointed to Höcke's radical views as justification.
The ZPS say that they decided to start spying on him after he gave an infamous speech in Dresden in January, which was so shocking to Germans that even his own far-right party decided to try and expel him (the process is ongoing).
In a speech in which he continually referred to Germany by using the word “Fatherland”, Höcke accused the country's current leadership of being a corrupt dictatorship which had sold out its own people to foreign interests.
To rapturous applause, Höcke said that Germans were a “brutally beaten people” and that the country was on the point of collapse due to “Americanization” and “the importation of foreign peoples”. He added ominously that the AfD was “Germany's last peaceful chance” to save itself.
Most controversially, he claimed that German politicians who said that Germany had a special duty to remember the Holocaust had “made speeches against their own people”. In his own speech he portrayed Germans as victims during the Second World War, saying that the allies had attempted to destroy “the core of German culture” by bombing Dresden.
Höcke is also suspected of secretly writing for neo-Nazi magazines under a pseudonym. According to Thurinen24, an investigation commissioned by the AfD leadership came to the conclusion that Höcke had used the pen name Landolf Ladig when writing for publications associated with the neo-Nazi NPD party.
“Where no light enters, that's where the mould grows,” wrote Milosz Matuschek, a columnist for the Neue Zürcher Zeitung. “This project throws a lurid light on the readiness of the AfD and Höcke's supporters to use violence and it shows that German intelligence services aren't paying enough attention to what is going on in far-right milieus.”