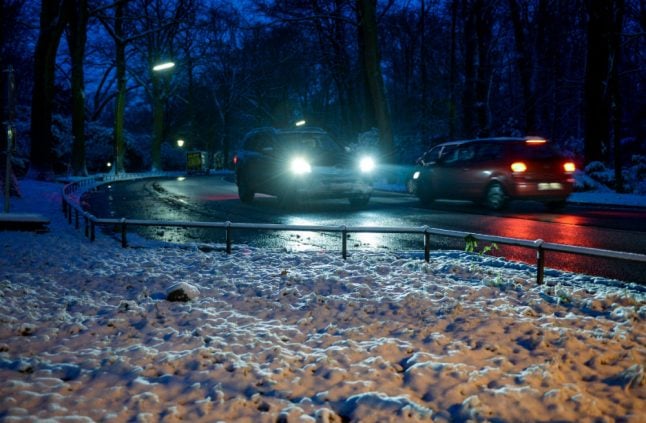 Cars in Hamburg driving along slushy streets early in the morning on Monday. Photo: DPA.

Forecasts of wintry conditions predicted by the German Weather Service (DWD) last Friday turned out to be accurate; the arrival of ice and snow led to chaotic traffic situations in many parts of Germany.

Operations continued early into the morning as police in some regions dealt with hundreds of accidents. Police in Leipzig alone were faced with about one hundred traffic accidents within four hours.

But since many vehicle drivers had driven cautiously as a result to the slippery roads, not many serious accidents occurred. At the start of rush hour on Monday, the roads in many parts of Germany were clear again as much of the snow and ice had melted thanks to a rise in temperatures.

Prior to the big thaw there were numerous road accidents.

When a car in Schleswig-Holstein crashed into a tree – probably because the roads were slippery, according to the police – four senior citizens inside were seriously injured.

In Brandenburg, police reported that 66 weather-related accidents occurred between 5:30pm on Sunday and 4am on Monday morning and 21 people were slightly injured.

In Saxony-Anhalt, almost 300 accidents took place on Sunday and at least 42 people were injured.

But it wasn’t just the roads which were affected due to the wintry conditions.

More than 300 flights were cancelled and hundreds more delayed as snow and ice blocked runways at Germany's largest airport in Frankfurt on Sunday, the airport operator said.

Some 330 flights were cancelled by 5:00pm after heavy snow and sub-zero temperatures struck the region around the financial capital, a spokesman for airport operator Fraport told AFP.

Elsewhere in the country, Düsseldorf airport was forced to close for four hours on Sunday afternoon.

Meanwhile, trains were delayed, redirected or cancelled across North Rhine-Westphalia. The high-speed rail route between Cologne and Frankfurt was temporarily shut down before opening up again on Monday morning.

A spokesman for the Aachen police said an investigation into whether the tree had fallen over due to gusts of wind or whether an error had been made in the setting up of the tree was still underway.

DWD warned against storms early in the morning on Monday in which strong winds were expected in the southern area of Germany around the Alps.