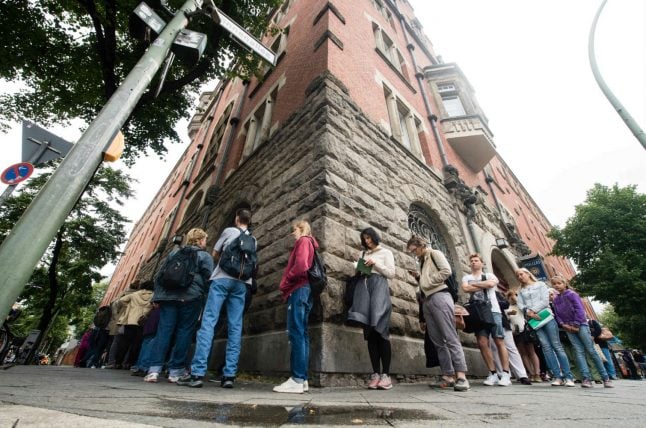 The heavily indebted German capital has been on an austerity drive for the last 15 years, leaving some public services in a shamble.

While its lush parks and relatively low cost of living make the city an attractive place to call home, encounters with city authorities are often a different story.

As the last revellers stagger out of the clubs at 5.00 am and road sweepers begin doing their rounds, Alichan Terbulatov has already been queueing for hours outside the civil service office of central Berlin's Mitte district.

“It's a total farce. I got here at one in the morning” to get a birth certificate, the father of three told AFP.

Terbulatov was far from alone. Fifteen others were standing in line, waiting first for cardboard tokens bearing queue numbers that the concierge at the office began distributing at 5:20 am.

With a ticket, they can return two hours later and exchange it for another – this time an official queue number that hasn't been written and cut out by the concierge.

Finally, between 9.30 am and midday, they will have to return a third time to collect the birth certificates.

Sandra Obermeyer, an elected official in Mitte, speaking on behalf of the district council, told AFP: “We don't have enough trained civil servants… At the same time, the number of births have grown sharply.”

But for those having to queue hours to register their child's birth, it is little comfort.

“It can't be more than half an hour's work to produce a birth certificate,” fumed Omar Renmo, who had also stood in line since the early hours of the morning.

For parents, there is no alternative. Without collecting the official paperwork within two months of a birth, a newborn would not be covered by health insurance and the family would be unable to claim child benefits.

The rigmarole is repeated from the cradle to the grave.

The average waiting time for a death certificate is 38 days, even though burials cannot theoretically be held without the document.

Some couples have been forced to push back their wedding plans at the last minute, after waiting without success for an appointment to say “I do” at a city hall.

“Berlin is a great, multi-faceted and dynamic city. But it fails in some of its fundamental missions,” said Maren Jasper-Winter, a local MP for the pro-business Free Democratic Party.

Former mayor Klaus Wowereit, who once described Berlin as “poor but sexy”, set severe budget cuts in motion in 2001 to shed the city's mountain of debt – which still tops €59 billion.

The austerity measures turned out to be so draconian that the authorities, including the police and courts, are today finding it hard to provide an adequate service.

Ralph Knispel, the head of Berlin's association of prosecutors, said numerous cases had to be put on ice or simply closed because of a lack of staff.

“The state of the Berlin justice system is such that, for the prosecution service in particular, law is no longer applied,” he said.

Police officers in the state are among the worst paid in Germany and some have to take on second jobs to make ends meet.

In a sign of the dysfunction, an inquiry into the police service's failure to stop Christmas market attacker Anis Amri, who killed 12 people with a truck in December 2016, found embarrassing shortcomings.

Because of staff shortages, Berlin police apparently monitored the Tunisian failed asylum seeker only on weekdays and not during the weekends and public holidays.

Some state schools are in a dire state as well.

One recently saw its ceiling collapse due to leaks, with a catastrophe only averted because it happened during school vacation.

For the FDP's Jasper-Winter, the city was simply not ready for the drastic transformation in demand and population size following the fall of the Berlin Wall.

Today, it is one of the most visited European cities and more than 400,000 people have moved to the capital since 2001, sending rental costs soaring.

“The city wasn't prepared for such massive development,” said Jasper-Winter.