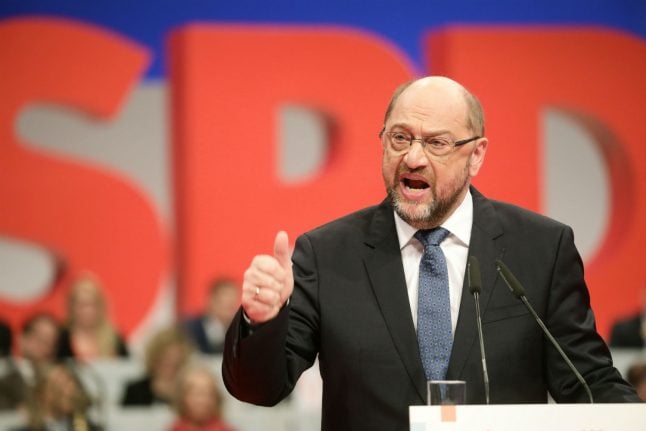 Schulz delivered a passionate plea for a more united and federal Europe at an SPD party congress that was due to decide whether his centre-left party will enter exploratory talks to form a new coalition government with Merkel.

The treaty would then be presented to all member states for ratification, with those that reject it automatically leaving the bloc, Schulz proposed in a speech at a Berlin meeting of some 600 delegates.

He suggested a target year of 2025, one century after the SPD first spoke of a future “United States of Europe”.

Schulz said only a more united EU could meet challenges such as combating climate change or managing mass migration, forcing internet giants such as Google and Facebook to respect civil rights or stopping large companies from dodging taxes.

“Europe is our life insurance,” said Schulz. “It is the only chance we have to keep up with the other great regions of the world.”

He also argued that only a strengthened EU would stop the advance of right-wing nationalists, citing gains they had made in Germany as well as Austria, Denmark, Finland, France and the Netherlands.

“If we don't change course, if we don't strengthen Europe in very practical and concrete ways, then these forces will win,” he warned.

He reiterated that the eurozone should have more investment and a common finance minister and budget.

Schulz said that if the SPD ends up again governing with Merkel, Berlin's stance on Europe would have to shift away from the austerity approach of Merkel and her former finance minister Wolfgang Schäuble.

“God knows that the European Union can't afford another four years of German policies on Europe in the style of Wolfgang Schäuble,” he said to applause.