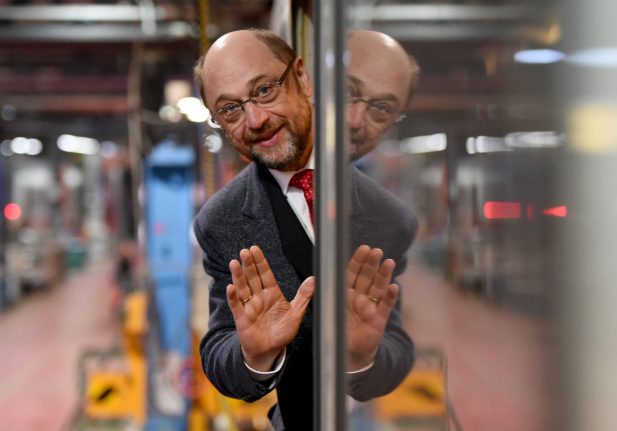 Party leader Martin Schulz has asked his deeply divided SPD to give him the green light for exploratory talks on joining Merkel in another coalition government starting in early 2018.

“For us, nothing is pre-determined, nothing is automatic,” Schulz said this week, while also noting that another option would be to allow Merkel to run a minority government, an idea she has so far opposed as too unstable.

Schulz, a main loser of September's elections who now may be kingmaker, has vowed to extract maximum concessions for his 150-year-old labour party, including social welfare gains and steps toward greater “solidarity” in Europe.

He also supports French President Emmanuel Macron's sweeping vision for EU reform as well as a departure from Berlin's insistence on austerity in crisis-hit economies.

If the tough coalition poker indeed kicks off next week, Schulz will have to prove he can drive a hard bargain with Merkel, having backflipped on his repeated vows to take the SPD into the opposition.

For now, it is still a long and rocky road toward a new “grand coalition” government of Merkel's conservative bloc and the SPD – and new elections loom if they fail to reach a deal.

For Schulz, a former European Parliament president, it is the next phase in a roller-coaster ride since he splashed onto the German political scene only a year ago, tasked with defeating veteran leader Merkel.

He was initially celebrated within his party as a messiah, winning 100 percent party support in January and seeing SPD poll ratings briefly shoot up some 10 percentage points.

But over the following months Schulz met the fate of Merkel's previous challengers, with his campaign, built on fighting social inequality, losing steam amid a string of regional poll defeats.

In the September 24th general election, in which the far-right Alternative for Germany (AfD) protest party siphoned millions of votes from all mainstream parties, the SPD scored just under 21 percent, its worst showing since World War II.

Minutes after the dismal outcome was announced, Schulz pledged to rebuild the SPD on the opposition benches, a move widely cheered by the party's rank and file.

Most members felt that the past four years – in which the SPD was Merkel's junior partner in an “grand coalition”, or “GroKo” in German political shorthand – had badly wounded party support and morale.

Thousands of members had already defected from the historical working-class champions when former chancellor Gerhard Schröder slashed back the welfare state in the early 2000s.

Schulz was forced to take back his repeated snubs to Merkel in recent weeks after her talks aimed at forming a coalition with two smaller parties unexpectedly collapsed last month.

With the main parties wanting to avoid the risk of new elections that might give an even bigger boost to the AfD, pressure has grown on the SPD, from within Germany and elsewhere in Europe, to avert a political crisis.

President Frank-Walter Steinmeier – an SPD veteran who, as head of state, is supposed to operate above party politics – has since been brokering talks between party chiefs.

At the three-day SPD congress starting Thursday in Berlin, Schulz will have to convince sceptical members, including a passionately anti-GroKo youth wing, to allow him to at least sound out another pact with Merkel.

Schulz will seek to convince the party that the SPD, back in power, would be better positioned to improve the lives of ordinary Germans.

A committed European who speaks six languages, he has also vowed to promote a more united Europe, with Berlin assuming “a progressive, a more social, a more dynamic policy”.

In Merkel's CDU camp, meanwhile, deputy leader Thomas Strobl has warned the SPD that “a 21-percent party can't force through 100 percent of its campaign pledges”.

Whatever the outcome of the eventual talks, it will have to satisfy the SPD party base, because members will ultimately vote to approve or scrap any coalition agreement.

Convincing them will be a struggle, according to a new Spiegel Online poll, which found that less than 28 percent of SPD voters support another grand coalition.