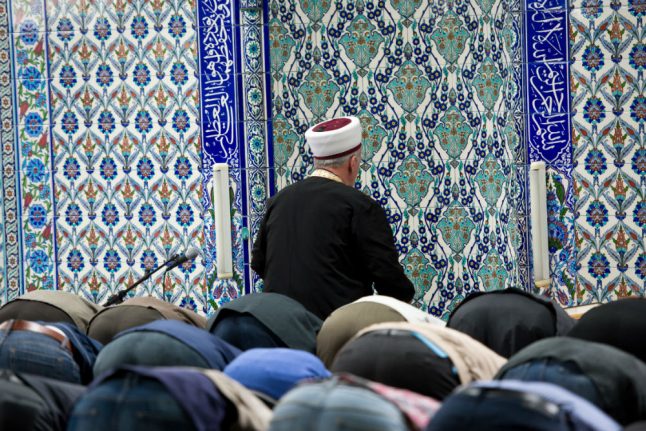 Worshippers in a Ditib mosque in Stuttgart. Photo: DPA.

The probe had inflamed tensions with Ankara, at a time when ties were frayed over Berlin's criticisms of President Recep Tayyip Erdogan's human rights record.

The Muslim clerics targeted by the German investigation belonged to Ditib, an organisation controlled by Ankara that manages some 900 mosques and religious centres in Germany.

They were suspected of spying for Erdogan's government on the movement of US-based preacher Fethullah Gulen, whom Ankara blames for a coup bid last year.

But German federal prosecutors said they have now halted the probe.

Prosecutors said they had sought arrest warrants for seven suspects who are now residing in unknown locations, but a presiding judge found that the individuals did not pose an urgent threat.

Another seven individuals were cleared as allegations were not substantiated by evidence.

Police were able to obtain “written documents, data storage banks and communications material” in raids targeting the suspects, but “analyses and investigations did not find” proof that they provided information to Turkish authorities.

The case against five others was dropped as they were found to have “provided only very general findings to the consulate and not concrete information relating to specific individuals”.

The Turkish government has however made some conciliatory moves in recent weeks, including releasing two German nationals who had been detained in Turkey.

A week after the German citizens were granted conditional release, both sides' foreign ministers also met in the southern Turkish resort of Antalya for informal talks – the first meeting since the bitter row intensified.