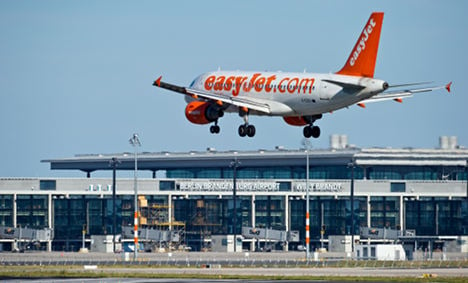 Photo: DPA
After the Air Berlin bankruptcy, the British airline Easyjet has decided to take on Lufthansa on domestic routes in Germany for the first time. The company has confirmed that it plans 250 weekly flights from Berlin-Tegel to domestic German destinations in Düsseldorf, Frankfurt, Stuttgart and Munich from January 5th onward.
Fifteen international destinations such as Vienna, Zurich and Rome are also included in the new schedule, the company announced on Wednesday.
Easyjet will thus serve four of the most important domestic routes in Germany, where competition to Lufthansa has been lacking since Air Berlin stopped flying at the end of October.
The British airline did not say whether they have plans for further connections such as Hamburg-Munich or Düsseldorf-Munich. But they did offer the enticing promise that additional destinations will be served with the start of the summer timetable at the end of March.
The new offer, which has been heavily advertised in the capital city, is still subject to EU antitrust approval. Easyjet plans to buy up to 25 jets from the insolvent Air Berlin including their take-off and landing rights. The European Commission is expected to approve the sale, as the Easyjet offer would alleviate fears of Lufthansa monopolizing German skies.

READ ALSO: Domestic flights up to four times more expensive after Air Berlin bankruptcy
One-way tickets with Easyjet on domestic flights will start at around €50 and thus cost roughly the same as Lufthansa's lowest booking tariff. The busiest route is planned to be between Munich and Berlin with an average of 14 flights per day. There will also be about 10 flights to and from Frankfurt.
In addition to the 19 new connections from Tegel, Easyjet also remains an important provider at Berlin-Schönefeld Airport where it offers flights to 51 destinations.
The Verdi union has said it supports the takeover bid that will include jobs for around 1,000 former employees of Air Berlin. After initial hesitation on the part of the workforce, there have been numerous applications for jobs with Easyjet.
“Demand is higher than supply,” the union said.