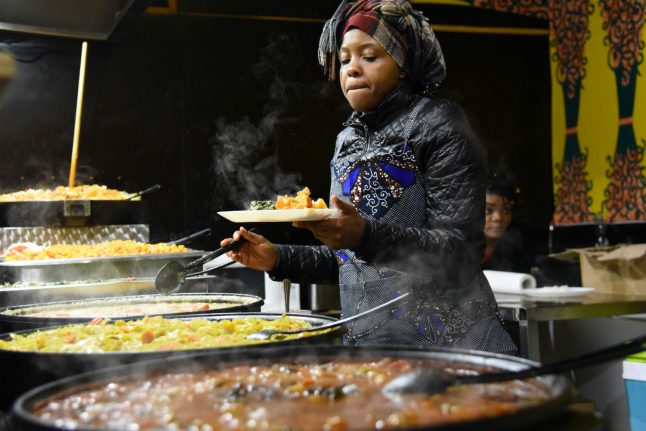 Winter-Tollwood. Photo: DPA
A customer's curiosity has been piqued. “The beans there, what's that?” he asks.
Sometimes the offerings in the vegetarian-vegan “dining room” at Munich's Winter-Tollwood Christmas market need a bit of explanation. For the third time running the festival is offering alternatives to bratwurst and goose for vegans, vegetarians and meat eaters, with visitors now being able to indulge in beans with vegetables or mushroom dumplings.
Some Christmas markets in Germany are now even completely vegan.
“This is definitely a trend and will grow more and more every year,” says Wiebke Unger, spokesperson for ProVeg, an association for vegetarians in Germany. There are 15 vegan markets throughout Germany this year, compared to only ten last year, she points out.
The demand is high and the supply in the markets is an opportunity to “draw attention to non-animal food” and to “try out new things in a convivial atmosphere”, Unger says.
“Fairground people always react very early to trends,” says Albert Ritter, president of the German Fairground Association. This also applies to the vegan and organic sectors, he explains, adding that at least one vegan or vegetarian stand is now represented at most Christmas markets. According to Ritter, vegan dishes are usually offered, but vegan clothing is also becoming more common. Photo: DPA
In northern Bavaria, the Alternative Christmas Market in Würzburg pulls in visitors with its vegan, fair-trade and sustainable products. But for the organizers it is more than about just vegan food.
“Being vegan is an attitude to life. It has to do with respect, tolerance and compassion. The most important thing is that everyone feels fine. And we are trying to convey this at our Christmas market,” says organizer Oliver Volkmuth.
From condoms made of natural rubber latex, to bags and wallets made of old jeans, to bamboo toothbrushes and tofu presses made of precious metal – there will be more than 30 stalls in Burkard House in downtown Würzburg on the second Sunday of Advent.
Volkmuth emphasizes that the association does not want to convert people. “We are not missionaries,” he says. “We don't want to work with crowbars. We want to show solutions and stimulate thinking.”
ProVeg spokeswoman Unger says the vegan offerings taste just as good as their carvinorous counterparts. The mulled wine at the stands of the Cologne Christmas market, for example, is basically vegan, and “it tastes even better”, she claims.
At the “Grüner Café” in the Tollwood tent in Munich guests can nosh on vegan rapeseed muffins with carrots, almonds, vanilla beans and spelt flour. At the “African Cuisine” stand there are more exotic offerings based around coconut milk, mango curry, plantains, dumplings with voodoo sauce and Anousi, a mustard-onion-lemon juice mixture.
Meanwhile Spätzle specialist Jürgen Braren is at Tollwood for the first time and is offering “pure vegetarian” recipes just for the festival. In downtown Munich he normally sells organic sausages at the Christkindlmarkt. Even there many customers ask for vegetarian sausages.
“The most important thing is that it tastes good,” he says.