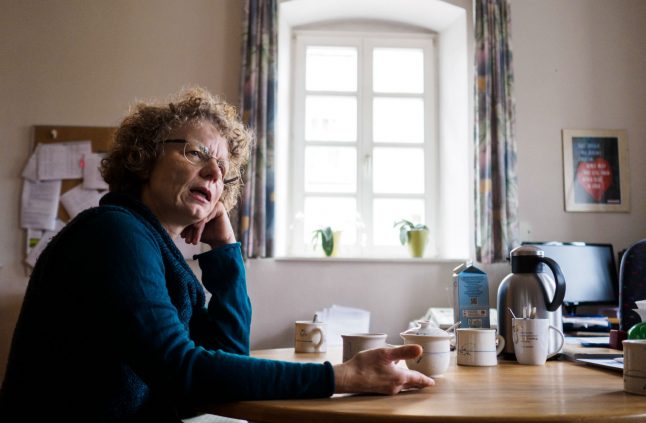 In 2015, a hurricane ripped through Doris Otminghaus' garden. Among the hammock, trampoline and garden furniture, a few tree stumps remain as evidence of the damage left behind.

It is hard to imagine anything so dramatic happening where she lives in Haßfurt, a town in Germany’s southern and conservative state of Bavaria, which Otminghaus describes as “a town with a villagey character”. On a wet Monday morning, aside from a few dawdling teenagers, the streets are practically deserted. On the high street, pensioners lick ice cream sundaes under grey skies in front of one of the few open cafes.

Haßfurt may feel quiet, but it is not cut off: what is happening inside Otminghaus’ house is, she believes, a seismograph for deep political and moral rumblings in Germany today.

Otminghaus, the pastor of the town’s evangelical church, has had an interesting year. Her decision to grant church asylum so far to a total of eleven asylum seekers threatened with deportation has brought her into the eye of a strange and heightening conflict between the church and state in Bavaria. She has both received human rights prizes and become one of a growing number of church figures to be investigated by the prosecution service.

When we meet, she has four people living alongside her family on the ground floor of her house, which sits directly opposite her church. Donation boxes spill across the stairs. In one of the rooms where two guests sleep, one from Afghanistan and the other from Ethiopia, posters of Bayern Munich football club are pinned above immaculately made single beds.

The house is homely and the good atmosphere is tangible: they laugh while she tries to jostle them into having a photo taken. “We are not together all the time,” says Otminghaus. “But there are many points of contact between us.”

According to The German Ecumenical Committee on Church Asylum (BAG) – a network of Protestant, Catholic and Free churches – church asylum today exists as a temporary form of protection for people without a legal residence status, who are at risk of life and limb if they return to their home country. There are currently an estimated 531 people (including 127 children) receiving church asylum across Germany, all of which are noted with the authorities. While church asylum exists today in a grey zone – recognised in custom but not embedded in law – it has, until recently, been tolerated by the state, and was recognised in a 2015 agreement between Germany’s churches and the Federal Office for Refugees and Migration (BAMF).

According to BAMF spokeswoman Edith Avram, the agreement between the federal office and the churches – that in cases where a transfer to another European country was imminent (so-called Dublin cases) a “solution oriented” examination would occur – still holds. “The agreement with the churches regarding sanctuary remains valid,” she tells The Local. “The Federal Office is in constant and good contact with the church representatives.” BAG estimates that the majority of church asylum occurrences involve Dublin cases.

But it has church asylum critics too, who draw attention to the problematic authority it gives the church in state affairs. Speaking to a clergy audience in Leipzig in September, Stanislaw Tillich, CDU politician and minister-president of Saxony, argued that a neutral democratic state should not grant any group a special moral authority to interfere with political debates. There was also, he added, not full consensus of opinion within the church itself.

Cat and mouse with the law

Despite the controversy surrounding this special church privilege, the crackdown in Bavaria is something new. According to Dietlind Jochims, pastor and chairperson at The German Ecumenical Committee on Church Asylum, prosecutors have looked into 130 cases so far, although all investigations have so far been dropped. She says, though, that congregations committing “repeat offences” have in a few cases been given fines.

The confrontation between state and church seems almost laughably stark outside Otminghaus’ house. As we stand by the garden gate, she points to her church opposite and the police station next door. While the church cannot grant asylum in legal terms, it is generally accepted that the police will not enter church grounds to deport someone.

“Clearly our door is always open,” says Otminghaus. “But as soon as they leave the house the police can technically pick them up. We go out and do the shopping. They eat and sleep here and we give them lessons. They have computers, and, importantly, a mobile phone to stay in contact with family. They are allowed into the church across the road, but they always check first to see if the police are on the street. It does feel a bit like a prison.”

Stephan Reichel, head of the organisation ‘Matteo – Church and Asylum’, says the tension has been specific to Bavaria. “Apart from a few small exceptions, the only place where investigations have happened is in Bavaria …If you go over the border into another German state it doesn’t happen. The pressure started last summer. And after about 50 investigations against priests and pastors there was Otminghaus, and she started really ringing the alarm bells.”

The church in Bavaria has played a big role in supporting and integrating refugees, explains Reichel. In tiny towns and villages the church has been revived as a hub of community and social life. “It’s brought neighbours together. When refugees are deported we hear many complaints from the locals. They are losing their new friends. There is often mourning in these small towns, sometimes tears.”

“The pressure is coming from some of the populists in the ruling CSU [Christian Social Union] party that want to win back votes from the far right,” explains Reichel. “But Christians are still the heart of their voting base and putting pressure on church asylum is not popular with them.” Doris Otminghaus with Hasib A, an Afghan asylum seeker who was staying with her in December 2016. Photo: DPA

In Haßfurt after the investigations against Otminghaus began earlier this year, she was buoyed to see huge support from the community. The town, she explains, is not a place with an established tradition of protesting against the state line. Pictures from the day show a circle of around 100 locals of all ages, hoods up in the cold standing at a protest outside Otminghaus’ church to hear her speak.

While the investigation against her has now been dropped, Otminghaus is resigned to the consequences of her continuing to offer church asylum. In the context of a hardening line against refugees in the country, it’s possible to see church asylum as an ancient custom being used today as a form of quiet resistance. But Otminghaus doesn’t see what she is doing as explicitly political. “We do church asylum as a necessity, as humanitarian help,” she says.

“The aim is not to have someone in the church for many years but instead to create a space to reflect on the decision made by the federal office,” says Bellinda Bertolucci, legal policy advisor with the German human rights group Pro Asyl. “For example, it is a chance that the BAMF looks at the case again and in case of faults it can be amended or they can find another solution. Very often, church asylum leads to another decision.”

According to The German Ecumenical Committee on Church Asylum, a majority of cases end up with a positive solution, leaving questions hanging over the quality of asylum decisions in the first place. One of the Afghan guests Otminghaus had in her house, who was initially going to be deported, has since been granted subsidiary protection, and is now looking for a school and a flat of his own in Haßfurt.

'We are in the right'

For Reichel, the focus should not be on defending church asylum, but questioning what it reveals about refugee policy. Given the scale of refugees taken in by Germany, the numbers who take refuge in churches are relatively low. “However I personally think each and every church asylum is a scandal… …it means that something must be very wrong in our country.”

“We don’t need to defend church asylum as such,” he argues. “Because we are in the right. What we are focusing on is the reasons why we have to offer church asylum.”

“Pressure is increasing,” says Jochims from BAG. “The overall political debate has changed. But at the same time the church asylum movement has become stronger, there are more congregations, cloisters, monasteries doing it. The need for good networking and solidarity is eminent. The protest against criminalization, especially in Bavaria, is getting louder.” Their priorities over the coming year will, she says, be working to prevent further rollback in refugee protection.

Otminghaus would ultimately like to see a situation in the country where nobody needed to knock on her door asking for church asylum. Under her roof, she has seen people suffer, as the trauma of their experiences rise to the surface. “We’ve seen people who can’t sleep,” she says. “People who lose weight because they can’t eat. People become sick. These are very hard times for these people.”

She can also see how what is happening inside her house, in this small town in Bavaria, is entangled with the situations in countries across the world. She is critical of German deportations of Afghan refugees, when Afghanistan is “clearly not safe”, and says refugees should not be sent back to the “terrible conditions” in Hungary, or to Italy. She also bemoans a lack of solidarity. “People are drowning in the sea. What is happening in the Mediterranean is a political defeat.”

The winds of German refugee policy have blown into Haßfurt since 2015, just like the hurricane did. Yet Otminghaus remains unbending: “It is important the public knows what the state is doing. The pressure does not intimidate me.”