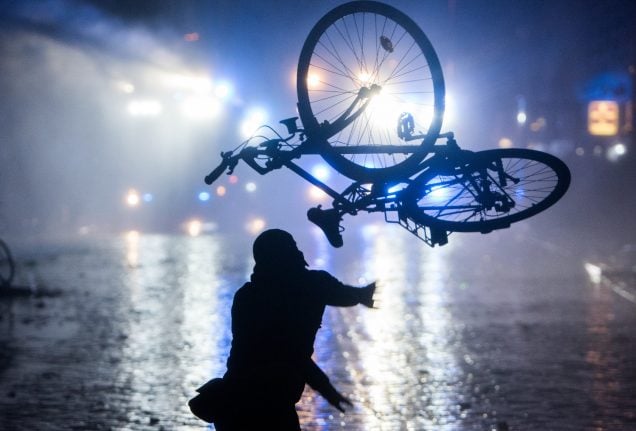 A man throwing a bicycle in the direction of police water cannons in July in Hamburg. Photo: DPA.
Five months after the riots at the G20 summit in Hamburg, police have raided properties in eight German states, Hamburg authorities announced on Tuesday. The operation, run by the special commission “Black Block”, has been under way since the early morning.
A police spokesman said that the aim was to secure further evidence in connection with violence at the summit. A double-digit number of apartments associated with the left-wing scene have been searched in states including Hamburg, Berlin, Hesse and North Rhine-Westphalia.
The searches were carried out in connection with investigations into riots during a police operation in the Hamburg district of Bahrenfeld on the fringes of the G20 summit.
At that time, federal police officers took action against about 200 demonstrators because, according to their own statements, they were attacked with stones and bottles, among other things. The media has reported, however, based on video evidence that the police were only attacked with three projectiles.
The spokesman went on to say that the left-wing cultural centre “Rote Flora” in Hamburg was not searched during Tuesday's raids. After riots on July 7th in the Schanzenviertel, the Rote Flora's organizers were accused of involvement in the violence.
Rioting began in Hamburg on Friday July 6th – the day before the G20 started – and continued until the Sunday. Black bloc protesters burned cars and smashed in the windows of shops in several parts of the city, causing an estimated several million euros worth of damage.

Police won initial sympathy after 500 officers were injured in clashes with masked protesters. But subsequently at least 35 investigations were launched into alleged crimes by officers against demonstrators, most of which were assaults.