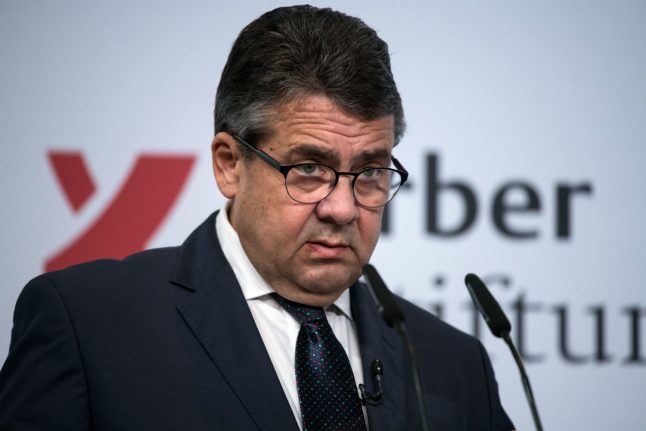 “The current withdrawal of the US under Donald Trump from its role as the reliable guarantor of western multilateralism is accelerating a change in the world order and has direct consequences on the perception of German and European interests,” Sigmar Gabriel said.

He said that the current US administration had taken an “extraordinary distance” from its traditionally close relationship with Europe, which it now increasingly viewed as a “competitor or economic rival” rather than an ally.

Urging Europe not to sit back and wait but take its fate into its own hands, Gabriel warned that the “US withdrawal is not just about one single president, it won't change fundamentally with the next election”.

“That's why there is no doubt that Germany and Europe, given this situation, need to take on more than before,” he told a foreign policy congress in Berlin.

“To say it openly: it's a risk that's forcing us to act. We should not wait and see how things develop, and not have an influence on it,” he warned.

“Only when the European Union defines its own interests, as well as projects its power, can it survive,” said Gabriel, warning that the continent was viewed as prosperous but weak.

French President Emmanuel Macron's election was a “a stroke of luck” because he had understood EU's decline and had ideas on how to reform it, said the foreign minister.

“The German position on these initiatives must be determined by the next government – no matter what it looks like,” said the foreign minister at the congress organised by the think-tank Körber Foundation.

“That must be at the centre of government policies,” he said at a time when Chancellor Angela Merkel's conservatives and Gabriel's Social Democrats are eyeing a potential new coalition government.

Trump's election has impacted trust in the transatlantic alliance, with only 43 percent of Germans now viewing Washington as Berlin's most important foreign partner, down from 60 percent a year ago, said a survey presented at the congress.

By comparison, France was seen by 63 percent Germans as the most important foreign partner, up from 60 percent 12 months ago.