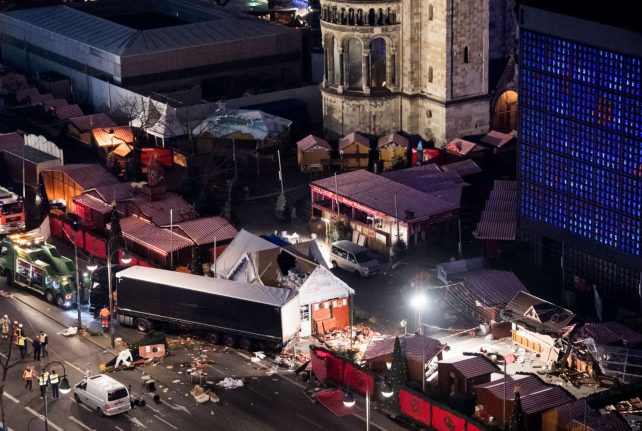 The scene of the attack at Breitscheidplatz. Photo: DPA

Relatives of the 12 people who were killed in the December 19th, 2016, truck rampage in Berlin vented their anger in a withering open letter to Merkel, accusing her of “political inaction” and of failing to reach out to the bereaved.

“Almost a year after the attack, we note that you have not shared your condolences with us either in person or in writing. In our opinion, this means that you are not doing justice to your office,” read the letter, published by weekly magazine Der Spiegel on Friday.

“It is a matter of respect and decency and it should be self-evident that you as head of the government… acknowledge to our families the loss of a relative because of a terrorist act.”

Government spokesman Steffen Seibert said it was “a moving, critical letter” that was read at the chancellor's office “with the greatest respect”.

Merkel will meet the families on December 18th, a day before the first anniversary of the attack, to listen to their grievances and see “which lessons can be learned”, Seibert said.

But he emphasised that the meeting had been scheduled before the open letter was sent, and pointed out that Joachim Gauck, the president at the time, met with the families back in March in agreement with Merkel's office.

Nevertheless, “the letter shows how useful and urgent this meeting is”, Seibert added.

The signatories also had harsh words for the security failings that allowed Anis Amri, a failed asylum seeker from Tunisia, to carry out the attack, the deadliest yet in Germany to be claimed by the Isis terror group.

Investigations have shown that authorities missed a number of opportunities to arrest and deport the 24-year-old, a known drug dealer with connections to radical Islamists.

He had managed to escape detection by skipping across German state lines and using different identities.

On the day of the attack, he hijacked a truck and murdered its Polish driver before ploughing the vehicle through the market, killing another 11 people and wounding dozens more.

Amri was shot and killed four days later by Italian police in Milan.

The German government has so far paid out €1.6 million in compensation to those wounded in the attack and to the victims' families, according to the justice ministry.