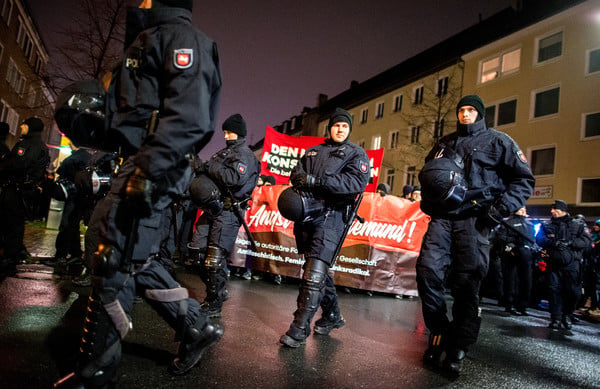 Hannover police on Friday were preparing for the AfD congress and the larger number of expected protesters. Photo: Hauke-Christian Dittrich/DPA
The anti-migrant, anti-Islam AfD captured nearly 13 percent of the vote and almost 100 seats in parliament in a September general election — a watershed moment in post-war German politics.
However a festering row between radical nationalists and more moderate forces has roiled its top brass, with co-leader Frauke Petry abruptly quitting the AfD just days after the election to form her own breakaway party.
Some 600 delegates at the two-day congress in the northern city of Hanover will vote on a replacement for her as well as a new board, determining the ideological direction of the party as it gears up to oppose Chancellor Angela Merkel's yet-to-be-formed government.
“The AfD is unable to settle down, it is wrestling with the course it wants to take and power within the party,” news website Spiegel Online said. “The fight over posts and the platform shows that the party is still divided on how sharply rightward it wants to go.”
Merkel's woes
The meeting is expected to draw around 8,500 leftist protesters supporting Merkel's liberal border policy, which allowed in more than one million asylum seekers since 2015.
The GdP police union called for calm, following clashes with demonstrators in the western city of Cologne during the last AfD congress in April that left several officers injured.
“We expect all participants in the rallies to exercise their right of assembly peacefully,” union leader Dietmar Schilff said. “Any violence will lead to the forfeiture of that right.”
Hanover police chief Uwe Lange said the congress centre hosting the AfD event would be ringed with barbed wire and security barriers to protect delegates, with thousands of officers deployed.
Launched as a populist anti-euro party in 2013, the AfD has veered sharply to the right since and campaigned for the September election with slogans such as “Bikinis Not Burkas”, “Stop Islamisation” and the ubiquitous “Merkel must go”.
It is now represented in 14 of Germany's 16 state parliaments but has been shunned as a potential partner at the national level by the mainstream parties. But the fractured political landscape has made it more difficult than ever for Merkel, in power for 12 years, to cobble together a ruling majority. Talks to form a coalition spanning the political spectrum for her fourth and probably last term broke down in acrimony last month. She is now trying to woo the centre-left Social Democrats back into a “grand coalition” government.
If she is successful and averts a snap election, the AfD would become Germany's largest opposition power, strongly boosting its profile.
Syria safe for refugees?
The AfD had two leaders until now, Petry and Joerg Meuthen, who has allied himself with the party's nativist wing.
Delegates will debate a motion to have Meuthen as the AfD's sole president. However more centrist forces in the party are backing the party's Berlin chief, Georg Pazderski, a former army colonel, as co-leader.
Yet speculation was rife that the party's powerful parliamentary group chief, Alexander Gauland, could mount a leadership challenge. Gauland told AFP last week the party needed to bridge its divisions along ideological and geographical lines.
“It is crucial to me that the top of the AfD reflects east and west as well as more conservative and economically liberal positions,” he said.
The list of motions to be debated in Hanover offered insights into the party's priorities. They include a call for Germany to ban circumcision of male babies targeting a common practice among Muslim and Jewish families, and a
condemnation of a new definition of anti-Semitism adopted by parliament criticised as a “curb on free speech”.
The party recently sparked outrage by calling for the immediate return of tens of thousands of Syrian refugees in Germany, claiming that “large parts” of the war-ravaged country were now safe.
By AFP's Deborah Cole