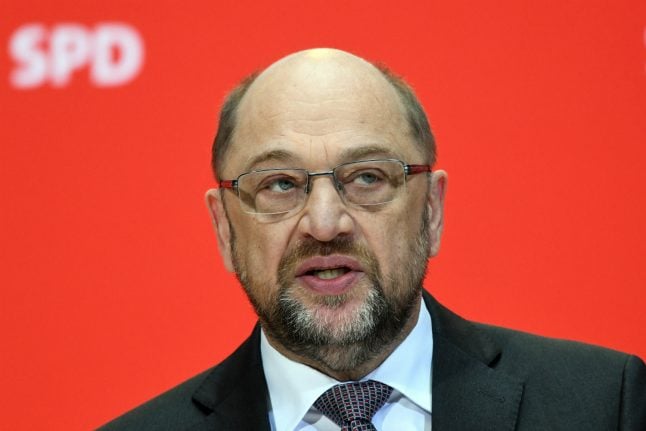 On Friday, the Social Democrats are holding talks over the possibility of renewing their partnership with Merkel’s Christian Democrats and forming another so-called Grand Coalition.

Negotiations to form a so-called Jamaica coalition — or one between conservatives, center-right business-friendly Free Democrats and the Greens — collapsed when the Free Democrats withdrew last week.

Germany found itself in unchartered waters not previously seen since after World War II.  This put the unpopular possibility of a grand coalition back on the table.

But the Social Democrats were initially wary, as they received their worst post-war election results in the elections at 20.5 percent of the vote in the September 24th elections. Schulz, indignant about the turn-out, stated that the SPD would become an opposing party to Merkel during her fourth-term.

“The [SPD’s] plan was to be a forceful opposition against a chancellor on her last miles,” Thomas Jäger, a professor of international politics at the University of Cologne, told The Local. “[They wanted] to look fresh and dynamic. But this position changed slowly.”

There are three reasons behind this, he says: First of all, Germany’s president Frank-Walter Steinmeier stepped up the pressure on the parties to come to a mutual agreement. Secondly, some of the ministers would cling to their current jobs. Lastly, some of the SPD representatives fear that a new election could cost them their seat.

Still there are worries that a combined coalition with Merkel could do more harm than good in the end, as the SPD has seen their support  drop both times they entered a partnership with Merkel.

“The fear is well-founded, that a third term with Chancellor Merkel will push the SPD in four years under 20 percent [of the vote in the next elections,” says Jäger, pointing out that it would be an especially dramatic drop from the 40.9 percent they received in 1998.

The SPD and CDU/CSU are united on core views such as increasing spending for education and technology, and their overall outlook on European unity. However they are sharply divided on health care — the SPD calls to abolish private insurance, which the CDU is against. The CDU furthermore calls for tax cuts, whereas the SPD wants more spending directed towards low and middle class Germans.

The SPD’s youth wing, the Jusos, are also not enthusiastic about the prospect of a grand coalition. On Friday, they launched a petition on their website against another coalition, using the hashtag #NoGroKo (short for “No grand coalition”).

“Democracy is based on the coming together of mutual camps — which doesn’t occur between the SPD and the CSU,” they wrote.

They said that while grand coalitions make small steps, no large progress would be made towards pressing issues of the times such as “the redistribution of wealth, investment in the future, the fight against child poverty, and the further development of European integration”.

The most popular partnership is a minority government formed between the Christian Democrats and the Greens.

It is unlikely that the SPD will announce whether it will try to form a Grand Coalition with Merkel until after their party congress next week.

SPD deputy and Hamburg Mayor Olaf Scholz has said the party is not in a hurry to decide as Germany can still remain stable with its current caretaker government of the CDU/CSU and the SPD.