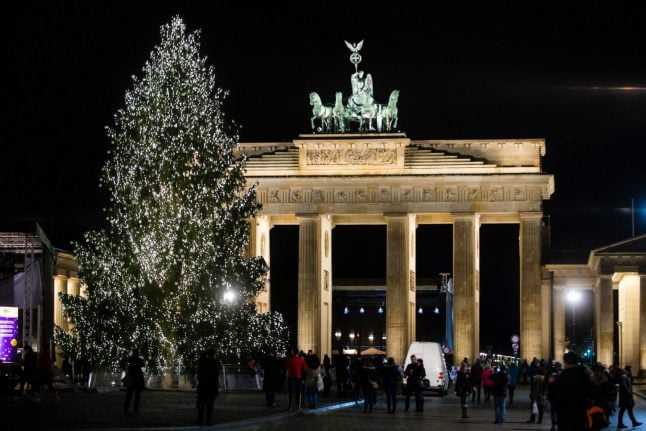 Head to the Christmas markets

Bundle up and get thee to your nearest public square or Platz because chances are, it has been transformed into a winter wonderland of lights, smelling of candied nuts and mulled wine. Nothing raises seasonal spirits like a German Christmas market, many which are open until late on December 24th.

Just like in America and the UK, advent calendars are hugely popular in Germany.

Chocolate is likely to remain the most popular choice for years to come but nowadays you can get everything from cosmetics to gin advent calendars. Check out our alternative advent calendars gallery for ideas.

Write to the Weihnachtsmann or the Christkind While St. Nicholas is still a beloved figure in Germany, das Christkind, meaning Jesus child, was set up as the main gift bringing figure of the festive season by Martin Luther in the 16th century, in place of the saint.

This sprite-like figure is usually depicted with angel-like wings, blonde curls and a crown and is said to be the incarnation of Christ as an infant or often a golden female angel. However, the Weihnachtsmann, or Father Christmas, a re-import from America based loosely on St Nicholas, is rising in popularity in Germany.

In Germany, the Christkind has three addresses at the Weihnachtspostämtern (Christmas post offices) in Engelskirchen, Himmelpfort and Himmelstadt. Meanwhile St. Nicholas has two, one in Nikolausdorf and one in St. Nikolaus, and the Weihnachtsmann has two – Himmelsthür and Himmelpfort.

Hundreds of thousands of children write to these figures each year and, as long as their letters have arrived by December 14th, they are sure to get a reply before Christmas Eve.

Forget the turkey – a goose is the traditional German yuletide feast in Germany. Around five million geese are eaten each year in Germany in the period between St. Martin's Day on November 11th and Christmas alone, according to the Tagesspiegel. If you're planning to partake in this particular tradition, make sure to order your bird ASAP so you don't miss out!

Not a fan of goose? Weihnachtskarpfen meaning Christmas carp are a pescatarian alternative also enjoyed on the holy night of the 24th. So track down your local fishmonger and put in an order for fresh carp to be ready in time for your feast. According to Statista, Germany is predicted to spend €94.5 billion on shopping during the Christmas period in 2017. German households will spend on average €116 on food and €214 on Christmas presents this year, says Deloitte.

So brace yourselves for the mall and get in that checkout line. In case you're stuck for ideas, according to a survey by Deloitte, sweets, gift-cards and cosmetic products are the most popular gifts this year.

Set out your advent wreath

The four Sundays preceding the big day are known as Advent Sundays. Germans mark them with a wreath called an 'Adventskranz', decorated with four candles. On the first Sunday, one candle is burned, on the second, two, and so on.

Alongside setting out the advents wreath, Germans tend to begin decorating their homes in early December with evergreen branches, strings of lights, paper stars in the windows and a nativity scene called a 'Krippe'. You'll have to be patient when it comes to the Christmas tree though, as this comes later in the festive season.

Until then you can occupy yourself by filling your home with some of the wonderful wooden decorations Germany produces. These include Weihnachtspyramide, which are windmill-like structures powered by the heat of candles, nutcrackers, Schwibbögen, meaning carved candle arches, and smoking men who appear to puff on a pipe when you burn incense inside them.

The bigger the better, apparently. December 6th was St. Nicholas' Day. Hopeful children polish their boots the night before and leave one out with the hopes that St. Nick will visit and fill them with chocolates. Before the Reformation, it was St. Nicholas' Day which was celebrated as the main day for giving presents, but Germany has since shifted its gift giving to Christmas time.

Go to an Advent concert Adventsblasen at the Marienkirche in Dessau. Photo: DPA

Throughout the Advent period churches across the country host carol concerts. You'll most likely recognise a few such as 'Silent Night' and 'Oh, Christmas Tree' which are both tunes Anglophones know, but started out as German songs. Time to pick up a songbook and learn the original German words for those along with classics like 'Kling, Glöckchen', meaning 'Ring Little Bell', and 'Alle Jahre Wieder', meaning 'Every Year Again'.

Another form of festive concert to attend is das Adventsblasen  –  “Blasen” is what a wind instrument does when you blow into it. So an Adventsblasen roughly translates to Advent wind concert. Adventsblasen usually take place either in churches or in open places like Christmas markets – and the idea is to bring Christ down to earth with the music.

Get your Stollen baked

Germany loves its baked good and of course, it has a word for the ones you indulge in specifically at Christmas time – Adventsgebäck. These traditionally include Weihnachtskekse', meaning Christmas biscuits, Lebkuchen, soft gingerbread with a chocolate or sugar coating, and Stollen. Stollen is a bread-like cake usually made with some combination of dried fruits, candied citrus rinds, nuts and marzipan. The time to bake Stollen is now as, after baking, the loaf gets rolled in butter and then in powdered sugar and then it gets wrapped up and left to ripen for two to three weeks. The practice of bringing evergreen branches into your home dates back to pagan times but Christians in Germany first began bringing whole trees into their homes around the 16th century.

Christmas trees didn't really become popular in the United Kingdom until Albert, the German husband of Queen Victoria, introduced them to the royal household. Victoria was a popular ruler and anything the royal family did was soon mimicked throughout the UK, America and Canada.

Remember most places shut by the afternoon of the 23rd

Last minute shoppers beware: there's no chance of buying your presents or food on Christmas Eve in Germany. The 24th, known as the Heilige Nacht, meaning holy night, is the time when Germans celebrate Christmas. Everyone will be home with friends and family and everything will be shut, even Christmas markets. You have been warned.

Get cosey on Christmas Eve

Not only did Martin Luther spark the reformation of the Christian church, but he is also the reason people celebrate on 24th or 25th of December, not the 6th. Luther felt that the celebration on St. Nicholas' day way too grand for any one saint and instead advocated to redirect the source of celebration to Jesus Christ's birth.

Because of this, Germans get together as families on the evening of the 24th to eat a fairly modest meal – a smaller meal means more time to exchange presents.

Await the arrival of the Christkind or Weihnachtsmann

After the meal the children go to their rooms to await the arrival of the Weihnachtsmann, meaning Father Christmas or, more traditionally, the Christkind, meaning Jesus child. After one of these mysterious figures has visited, a bell is rung and the children come downstairs to find the tree magically decorated and surrounded by presents. Though Germans go less and less frequently to church, on Christmas Eve they attend en-(midnight)-masse. There is a real feel of community at these Christmas Eve church services and they also are a chance to indulge in the classical Christmas catalogue with the added benefit of the acoustics of a cathedral. What's more, they won't even kick you out if you've opted out of the church tax.

The festivities don't end after the 24th in Germany. Throughout the day of the 25th people continue to get together for more celebrations and many families spend the day preparing and enjoying a huge Christmas feast. (Which should be no stress considering you followed the guide and ordered your goose weeks ago!)

Boxing day sales are not a thing in Germany meaning there's nothing to do on the 26th but sleep off the after-effects of a month of indulgence and start mentally preparing for Silvesternacht – New Year's Eve!