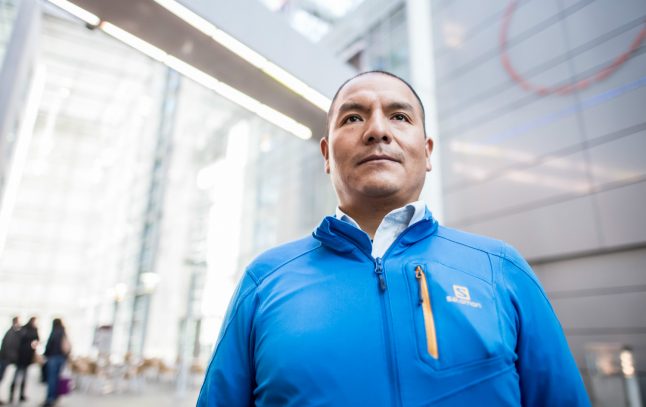 Farmer Saul Luciano Lliuya's case against RWE was “well founded,” the court in the northwestern city of Hamm said in a statement.

Lliuya argues that RWE, as one of the world's top emitters of climate-altering carbon dioxide, must share in the cost of protecting his hometown Huaraz from a swollen glacier lake at risk of overflowing from melting snow and ice.

RWE's power plants emitted carbon dioxide that contributed to global warming, increasing local temperatures in the Andes and putting the father of two's property at risk from flooding or landslides, Lliuya argues.

“Even people who act according to the law must be held responsible for damage they cause to property,” the judges said.

Now the court must decide whether “the accused's contribution to the chain of events depicted here is measurable and calculable,” they added.

“This is a major success not just for me, but for the people of Huaraz and everywhere in the world threatened by climate risks,” Lliuya said in a statement circulated by NGO Germanwatch.

He wants RWE to pay €17,000 towards flood defences for his community in Peru's northern Ancash region.

The 37-year-old also wants the German company to reimburse him for the €6,384 he himself has spent on protective measures.

Lliuya bases his claims on a 2013 climate study which found that RWE was responsible for around 0.5 percent of global emissions “since the beginning of industrialisation”.

The court said in a statement that it will choose experts to evaluate the claim in cooperation with both plaintiff and defendant, with Lliuya paying some €20,000 in fees up front.

“It will be up to the experts to quantify (RWE's) role, which could be different” from the amount he claims, the judges said.

After an initial hearing in mid-November, the court in the northwestern city of Hamm gave both sides until Thursday to provide further arguments to help them decide whether the case should go ahead.

The decision to hear the case is a “historic breakthrough with global relevance,” Germanwatch, which has backed Lliuya's claim, said in a statement.

“Major emitters of greenhouse gases can be held responsible for protective measures against climate damage.”

But the firm has insisted that the complaint was “not admissible” and was even “unjustified”, arguing that a single company cannot be held liable for specific consequences of climate change.

A lower court in the German city of Essen, where RWE is based, initially found that the lawsuit against the energy giant was unfounded.

The company has in the past said it did not understand why it has been singled out for legal action, stressing the efforts it had made to become more environmentally friendly.

As well as modernising its coal-fired power plants to reduce CO2 emissions, RWE has invested billions in renewable energy as part of Germany's move away from fossil fuels, it says.

Shares in RWE fell on the news, losing 0.31 percent in Frankfurt around 1315 GMT, against a DAX index of blue-chip German shares up 0.52 percent.

The Peruvian's case comes at a time when German politics is sharply divided over how to balance climate action against economic growth.

A government-directed “energy transition” to renewables, rather than nuclear power and fossil fuels, is making only halting progress, while environmentalists are pushing the country's powerful auto industry to produce less polluting vehicles after a series of scandals.

Climate and energy policy was among the most bitterly disputed issues in three-way coalition talks between Chancellor Angela Merkel's conservatives, the pro-business Free Democrats and the ecologist Greens before they broke down this month.