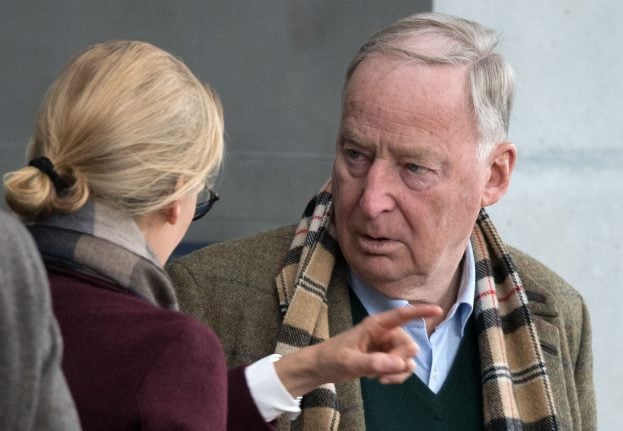 Around 600 delegates will assemble in the northern city of Hanover for the two-day event, with pro-refugee protests and police on hand.

The AfD won nearly 13 percent in September's general election, taking almost 100 seats in parliament on an anti-immigration and anti-Muslim platform.

Its main rallying cry was “Merkel must go” following her decision to let in more than one million asylum seekers since 2015.

The AfD has relished the chancellor's woes since the poll left her without a clear ruling majority and now tied up in protracted coalition talks.

However the AfD has growing problems, with a power struggle emerging between hardliners and more moderate forces in the four-year-old party which could spill over at the weekend meeting.

The main order of business will be the election of new leadership after the dramatic departure in September of its best-known figure, Frauke Petry.

While co-leader Jörg Meuthen is standing for re-election, he is facing a challenge from the party's Berlin chief, Georg Pazderski.

“It is crucial to me that the top of the AfD reflects east and west as well as more conservative and economically liberal positions,” he told AFP.

Former co-president Petry, who bolted over a split with radical nationalists to form her own party, had been the AfD's most charismatic voice.

Although the sudden exit reinforced an image of infighting, Petry failed to lure more than just one MP to join her in defecting.

“She apparently hoped to take more people with her and then it didn't happen,” Gauland said.

“The parliamentary group is working together harmoniously,” he insisted.

It is also possible that Björn Höcke, who has triggered outrage with calls for Germany to back away from its atonement for World War II crimes, will stand in Hanover for the party's 13-member board.

Höcke recently became the target of a group of activists who unveiled a replica of Berlin's Holocaust Memorial secretly erected outside his home.

“Höcke and his supporters are in the radical nationalist wing of the party,” Berlin's Tagesspiegel newspaper said.

“If they are strongly represented on the new board, it would be seen as a rightward lurch for the party… possibly prompting many relatively moderate members to leave.”

The congress comes at a time of great uncertainty for Germany, with suspense building as to how the current deadlock in Europe's top economy can end.

Merkel held four weeks of talks with the pro-business Free Democrats and the ecologist Greens to form an unprecedented alliance spanning the political spectrum but the negotiations collapsed in acrimony earlier this month.

She is now courting the Social Democrats, who long languished in her shadow, to join her in a re-run of a “grand coalition”.

AfD leaders have claimed credit for the troubles stalking Merkel as she seeks to begin a fourth term.

“We have enormous volatility right now” that could help the AfD, political scientist Wolfgang Schroeder of the University of Kassel in western Germany told AFP.

“That could help feed the disenchantment with politics – along the lines 'they can't even get a government together'.”

Polls confirm an unsettled political landscape. Some show slight gains for the AfD since the collapse of the first round of coalition talks but others indicate a slight dip since the September vote.

Schroeder said the AfD's success meant other parties including the liberal FDP and Merkel's Bavarian partners, the CSU, were trying to poach some of its tougher stances on immigration, Europe and climate protection.

“That may mean it will have to try harder to get attention – you'll surely see that at the party congress.”