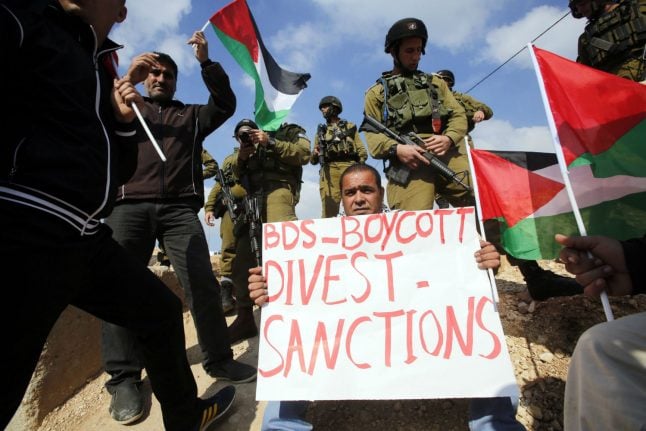 A BDS protest in the Palestinian territories. Photo: DPA

Various local subsidiaries of German public broadcaster ARD confirmed that they had dropped plans to air two concerts by former Pink Floyd musician Roger Waters. The move came in response to the 74-year-old rocker’s support for the Boycott, Divestment and Sanctions movement (BDS), which targets Israel over its military occupation of Palestinian land.

Waters will perform on two nights in Berlin on June 1st and 2nd 2018 and the ARD subsidiary RBB was supposed to broadcast the gigs.

“It was important for us to take a strong stance on this as a signal to the Jewish community in Berlin and Brandenburg,” said RBB director Patricia Schlesinger.

The move was supported by the Zentralrat der Juden (Central Council of Jews) which called it “an important signal that rampant anti-Semitism against Israel has no place in Germany.”

But Waters' tour manager Marek Lieberberg, himself the son of Holocaust survivors, told the Mannheimer Morgen that the move was an attempt to deny Waters of his right to freedom of opinion.

Waters has been accused of anti-Semitism by Jewish groups since at least 2013. The anger against him is primarily over his support for the BDS movement. But he also stoked controversy by telling an interviewer that “there were many people that pretended that the oppression of the Jews was not going on. From 1933 until 1946. So this is not a new scenario. Except that this time it’s the Palestinian people being murdered.”

The Anti-Defamation League (ADL), an organization which seeks to unmask anti-Semitism, said in 2013 that “anti-Semitic conspiracy theories” have “seeped into the totality” of Waters’ thinking.

What is the BDS movement?

The BDS movement was started by Palestinian NGOs in 2005 as a non-violent campaign to pressure Israel into ending its occupation of Palestinian territory which it captured during a war against several Arab states in 1967. It is supported by people from the worlds of academia, politics and culture, and includes Israeli supporters as well as Palestinians.

The BDS campaign is focused on pressuring universities, cultural organizations and governments into boycotting Israel until it abides by several UN resolutions.

The cultural boycotts have proved particularly controversial. Several big-name musicians have complained about bullying by the organization over their decisions to hold concerts in the Jewish state.

Earlier this year Radiohead front man Thom Yorke derided Roger Waters for publicly calling for him to cancel a concert in Tel Aviv. Saying he didn’t agree with a cultural ban “at all”, Yorke accused Waters of being “patronizing in the extreme.”

The BDS movement has meanwhile been criticized by the ADL as anti-Semitic “to its core” due to what they claim is a double standard in denouncing Israel while staying quiet on the crimes of neighbouring dictatorships.

The accusations of anti-Semitism are themselves controversial, though. Critics argue that the anti-Semitism tag is used to shut down legitimate debate on Israel's military and settlement policies.

How is the BDS movement viewed in Germany?

Unsurprisingly, BDS is extremely controversial in Germany. It goes without saying that calls to boycott Jewish products do not go down well in a country tarnished to this day by its own boycott policies during Nazi rule. Several critics have said that the boycott is a revival of the Nazi slogan “kauf nicht beim Juden” (don’t buy from Jews).

The movement is also criticized in Germany because it calls for a blanket boycott of Jewish goods from Israel, rather than just products made in illegal settlements.

In 2016 Gitta Connemann, deputy chair of the parliamentary group on Israel, told the Jüdische Allgemeine Zeitung (JAZ) that BDS is “anti-Semitism in its purest form” because it excludes Muslim-owned Israeli businesses from the boycott.

The cities of Munich and Frankfurt have responded by banning BDS from renting state-owned properties to host events.

Berlin is considering a similar measure after BDS spread a false rumour that the Israeli government was organizing a music event in the capital this summer. The BDS successfully lobbied several artists to drop out of the Pop-Kultur festival in Berlin’s Prenzlauer Berg, claiming that the Israeli government had an influence over its organization (a claim which was not true).

A month later Berlin mayor Michael Müller said that he was “absolutely” considering banning BDS from using Berlin’s public buildings to organize. “BDS stand in front of Jewish shops holding anti-Semitic signs. These are unacceptable methods from the Nazi era,” he told the JAZ.

Müller appeared to be referring to one of the most controversial BDS campaigns in Germany in which they “inspected” shops for products produced in Israeli settlements and then put signs up outside warning customers that “products here could originate from illegal Israeli settlements.”

Even on the far left of the German political spectrum, there is little support for BDS. Die Linke (the Left party) unanimously voted to reject calls for a boycott of Israel in 2011.

Meanwhile the Bundestag’s anti-Semitism Report 2017 said that the BDS movement was of limited importance in Germany. But it added that the language of the BDS “makes use of anti-Semitic stereotypes.”