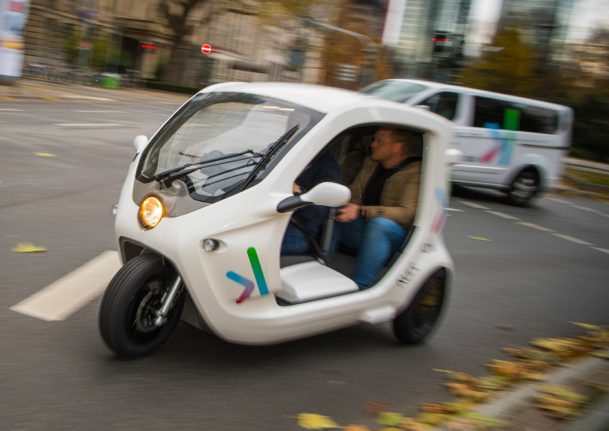 According to a statement on the DB website, published Monday, a fleet of 13 electric vehicles is hitting the streets of the Greater Frankfurt area as part of the first testing phase of their new eco-friendly shuttle service.

This fleet of manned vehicles also includes five electric powered tuk-tuks and two electric minibuses, which are ready to drop off any of the company's 15,000 local employees at 32 different DB locations.

DB employees call a ride using a smartphone app which picks them up and takes them to their desired station out of a possible 32 rail locations.

Passengers are grouped together with travelers making similar journeys to relieve traffic and help the environment.

The service has been developed by ioki, a subsidiary company of DB, which forms part of DB's new digital offensive of eco-friendly mobility services which link in with standard railway transport. Photo: Deutsche Bahn AG. Pablo Castagnola
In the last few weeks, two inter-connecting apps (one for drivers and one for passengers) have been developed by ioki's IT team. Through this initial testing phase, the team hope to get consumer feedback on their apps.

Trials are planned for other areas around Germany and next in the line-up is Wittlich in Rheinland-Pfalz, where 100 chosen customers will test out how the service fares in rural areas.

In 2018, testing will branch out into Hamburg, where the shuttle service is intended to be integrated into the existing public transport system, as part of the Smart City partnership DB has with the Hanseatic city.