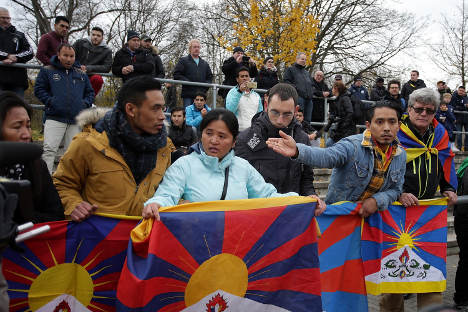 Protesters holding the Tibetan flag ahead of the match in Mainz. Photo: Hasan Bratic/DPA/AFP

The tour is part of an experiment, which runs until May, aimed at advancing the Asian superpower's chances at the 2020 Olympics in Tokyo.

But the project has courted controversy and become a diplomatic headache for Berlin after a pro-Tibetan independence protest during a match in Mainz.

“We believe this adjournment is essential in order to give us the time needed to discuss the situation calmly and openly and find a reasonable solution,” Ronny Zimmermann, vice president of DFB, the German football association, said on Friday.

“The two federations (German and Chinese) will try to work out a way of relaunching the project again quickly.”

The DFB confirmed that the Chinese Under-20s will not play the three matches scheduled to be played before the end of the year.

The Chinese Football Association said the situation was “regrettable”.

“These factors unrelated to sports were not in accordance with the basic principles of developing friendly relations between the two countries,” it said in a statement on Friday.

The game, which was being broadcast live in China, was halted at one point for 25 minutes because the Chinese players refused to continue after a group of six spectators unfurled Tibetan flags.

The visitors only agreed to resume play after the protestors took down the flags.

The Chinese Under-20s were due to play a second match on Saturday in Frankfurt, but pulled out after learning of plans for a new pro-Tibet protest inside the stadium.

“Freedom of expression is also acceptable inside football grounds and stadiums,” Grindel said.

China has ruled Tibet since the 1950s, and has been accused of trying to eradicate its Buddhist-based culture through political and religious repression.

Beijing insists that Tibetans enjoy extensive freedoms and that it has brought economic growth to the region.