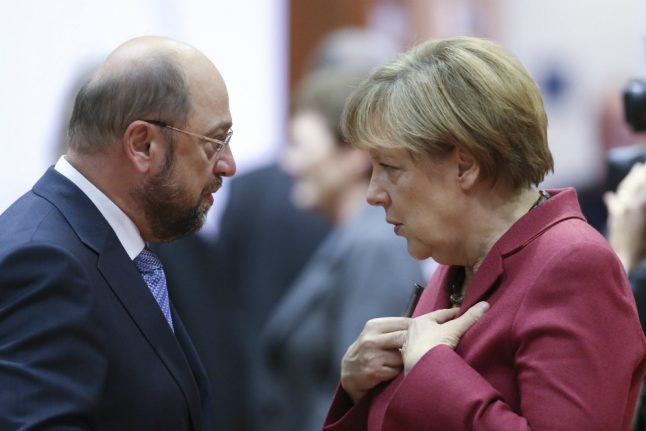 Schulz has repeatedly said the SPD would not return as the junior coalition partner in a government led by Merkel, after suffering a stinging defeat in September's general election.

But after Merkel's bid at forging a coalition with other parties fell apart, plunging Germany into a political crisis, voices within and outside the SPD have grown louder in questioning Schulz's decision and push for early elections.

President Frank-Walter Steinmeier, who holds the power to call snap polls and who is himself a senior Social Democrat, has said that this “is the moment when all participants need to reconsider their attitude”.

Steinmeier will meet Schulz on Thursday.

The president has already held talks with the leaders of parties in the failed coalition talks – the pro-business FDP – which halted the negotiations – and the ecologist Greens.

And he met with the leader of Merkel's Bavarian allies the CSU on Wednesday.

As the crisis shows no signs of abating, the Sueddeutsche daily reported that “in the SPD, unease is growing over its clear refusal of a grand coalition”.

“One must speak with the president openly, without already insisting on your own point of view,” Johannes Kahrs, who leads the right-leaning wing of the SPD, told Bild daily.

“With a view on Germany's ability to take action in Europe, the SPD should once again consider if it should not join a government,” Oettinger, a CDU politician, told Spiegel weekly.

Schulz himself told national news agency DPA on Wednesday that he is “certain, that we will find a good solution for our country in the coming days and weeks”.

He added that his party “is well aware of its responsibility in the current difficult situation.”

“Resistance is growing” against Schulz, Bild reported, adding that the “most prominent secret advocate for a new grand coalition is deputy chancellor Sigmar Gabriel”.

Schulz has declared that he was ready for a snap poll, but latest surveys show that an early election would likely deliver similar results to September's – and the risk of potentially getting a worse score than the record low 20.5 percent is something that SPD members fear.

“While a majority of rank and file members is fundamentally opposed to another stint in government, parts of the party's establishment feel that throwing a life-line to Merkel could well be preferable to unpredictable alternatives,” said Michael Broening, political analyst at the SPD-linked Friedrich-Ebert-Stiftung.

“At the very least it would enable the Social Democrats to push for a whole list of social democratic demands and basically dictate the terms of what is widely expected to be Merkel's last government,” he added.

With former finance minister Wolfgang Schäuble out of the way, the SPD could even make a play for the powerful ministry at a time when the public treasury is bulging with €45 billion, noted German media.

The party's rank and file are also wondering if former European Parliament chief Schulz is the best man to lead them into any new election campaign, according to media reports two weeks before the SPD's annual congress.

“Too many mistakes during the election, missteps with new appointments and – worst of all – a misjudgement of the public's current mood,” Bild said.