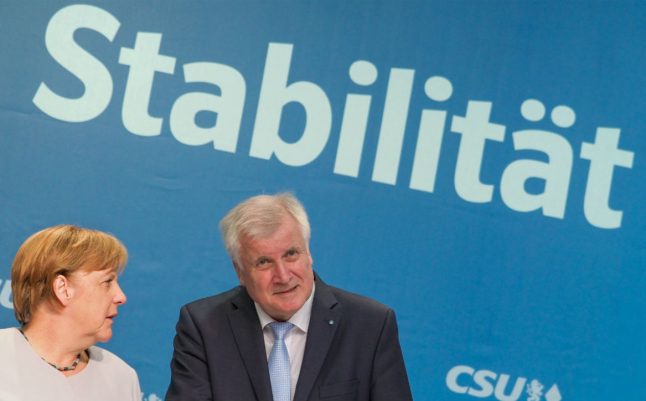 Angela Merkel and CSU leader Horst Seehofer in August in front of a sign that says "Stability." Photo: DPA.

In the words of Chancellor Angela Merkel's chief of staff Peter Altmaier, a “stable and reliable government … is our trademark, like 'Made in Germany'”.

Overnight, Europe's economic and political heavyweight was left without a viable coalition for weeks, if not months, to come.

Instead, it has a lame-duck government unlikely to take bold policy action at a time when the European Union needs a strong hand as it negotiates Britain's exit, and while Paris seeks Berlin's support for bold reform plans.

“The bitter truth is that Germany has been waiting for years for a French partner willing to meet it head-on as an equal power – only to now find itself as the problem, as France emerges once again as the instigator of fresh economic and political purpose in the EU,” said the Frankfurter Allgemeine Zeitung daily.

German President Frank-Walter Steinmeier, who now holds the cards due to his constitutional power to call snap polls, underlined the seriousness of the situation.

“We have before us an unprecedented situation in the history of the Federal Republic of Germany, that is, in the last 70 years,” he said, urging political leaders to reconsider their positions and return to the negotiating table.

With the Social Democratic Party stubbornly refusing to renew an alliance with Merkel after their humiliating defeat in September's polls, the veteran chancellor has little room to manoeuvre.

She could seek a minority government – an option she shuns because of its inherent instability – or face new elections, likely not before February.

But fresh polls carries a high risk, as Merkel could lose still more voters to the AfD, a party that has harnessed anger over her liberal refugee policy that brought 1.2 million asylum seekers since 2015.

In addition, her Bavarian allies the CSU are engulfed in intense infighting which would spell a major distraction in a new electoral campaign.

“No matter what Merkel does next, Germany has become Europe's latest problem,” said Judy Dempsey, analyst from political think-tank Carnegie.

“The expectation that the country, under Merkel's helm, would be predictable and stable is no longer a given.”

The fact that Merkel was forced to ask parties of very different stripes to form a coalition government was in itself due to the reality that Germany is not immune to the wave of populism sweeping the West.

The September 24th election saw the rise of the anti-immigration protest party the AfD with 13 percent of the vote, a shock in a nation where no far-right party had entered parliament in large numbers in the post-World War II ear.

The entry of dozens of lawmakers of the protest party fractured the political landscape further, making it harder to build a majority.

Thomas Kleine-Brockhoff of the German Marshall Fund noted that “for the first time since 1949, there is no majority grouping willing to form a government.”

“The stable colossus in the middle of Europe is suddenly instable. This will have severe consequences.

“Some of the ripple effects are unknowable at this point, but even the likely consequences are remarkable,” he said, adding that “all we know is that this process will need time to sort itself out – time during which Germany will be a paralyzed nation.”