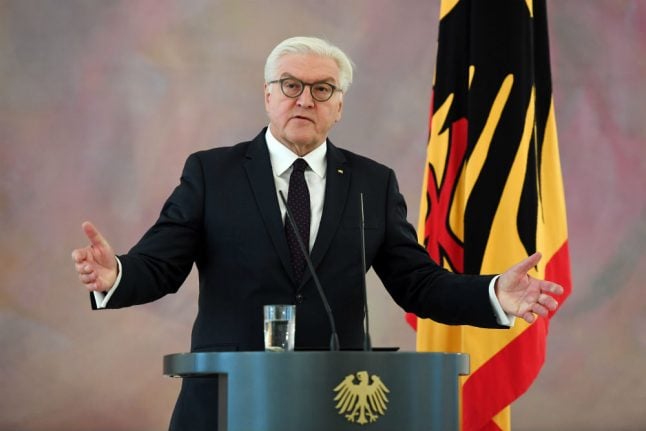 Frank-Walter Steinmeier, who takes centre stage because he can call snap elections, was to use his diplomatic skills as former foreign minister to persuade parties to return to the negotiating table.

The head of state, who has spoken with Merkel already, plans to meet the Greens on Tuesday and the Social Democrats (SPD) on Wednesday, and also schedule talks with the Free Democrats (FDP), to remind all sides of their responsibility toward the electorate.

After the shock failure of the month-long coalition talks, “we now have to watch the reaction of the various parties and their political bases”, he wrote in a note.

Merkel, in power for 12 years, now serves only as caretaker chancellor after she failed to win a clear majority in the September 24th elections, largely due to the rise of the far-right Alternative for Germany (AfD) party.

Her problems were compounded when the second-placed SPD, after humiliating ballot box losses, refused to serve another term as her junior coalition partners and vowed to go into opposition.

A subsequent four-week negotiating marathon to forge a new governing alliance with two smaller parties, the pro-business FDP and the left-leaning Greens, collapsed when the FDP pulled out early Monday in a shock move.

Although financial markets, after initial dips, quickly digested the news, Germany's political world was stunned by the first such debacle in the usually staid politics of the country's post-war era.

Steinmeier, the mainly ceremonial head of state, in a televised address implored all mainstream parties to rethink their positions and be mindful of their responsibility, including his own SPD.

Underlining the duty of lawmakers, Steinmeier noted: “We have before us an unprecedented situation in the history of the Federal Republic of Germany, that is, in the last 70 years.”

“The mandate to form a government is … perhaps the highest mandate given by voters to a party in a democracy,” he said.

SPD chairman Martin Schulz was, however, quick to reiterate that the labour party was “not available to form a new grand coalition” with Merkel's conservatives, vastly complicating the picture.

Germany now faces weeks, if not months, of paralysis with a lame-duck government that is unlikely to take bold policy action at home or on the European stage.

“The politics of Europe's most powerful economy – and until recently its main anchor of stability – has just entered a period of deep uncertainty,” said Eurasia Group, a political risk consultancy.

Merkel had been spared very harsh criticism because it was FDP chief Christian Lindner who ended the talks and sparked the chaos, in hopes of gaining “greater bargaining power in a fresh election”, it said.

Merkel stressed Monday that she favours running in new elections, which likely wouldn't be held before February, to the shaky proposition of trying to govern with a parliamentary minority.

The FDP's shock move, most commentators agreed, left only losers – with the exception of the anti-immigration AfD, which relished the chaos and said it proved “Merkel has failed”.

But this is a long-shot hope, given the SPD's determination to recover its fighting spirit from the opposition benches.

Fresh elections could be the only way out but, according to opinion polls now, may lead to a similar outcome rather than a game-changing result, spelling mainly the risk of boosting the extremist parties at the fringes.