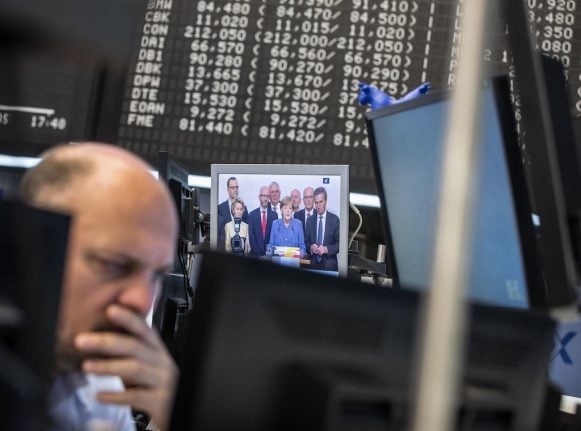 Germany's Dax fell on the news that coalition talks have broken up. Photo: Frank Rumpenhorst/DPA

After the Free Democrats walked out of talks with Chancellor Angela Merkel’s conservatives and the Greens on Sunday night, Germany’s DAX stock index fell by close to 0.5 percent at the start of trading.

It managed to reduce the loss to 0.2 percent by mid-morning but by 10am remained under the 13,000 point threshold, a seven-week low after the index hit a record 13,525 just a fortnight ago.

On currency markets, too, the euro started off down against the dollar and the yen as traders weighed the prospect of a minority government in Germany, or even new elections.

“Political uncertainty is more pronounced than almost ever before in the history of the Federal Republic,” said Commerzbank’s chief economist Jörg Krämer.

The euro later reversed its losses to trade higher; a sign of investors’ faith in Merkel to restore stability.

“Once the initial shock has worn off, there might be a good chance that this event isn’t necessarily being judged as all negative,” wrote trader Markus Huber of City of London Markets in a note.

“In case there will be new elections, there is a good chance that Merkel might get a better result, especially as the German economy has been booming since the election back in September, growing much faster than for many, many years.”