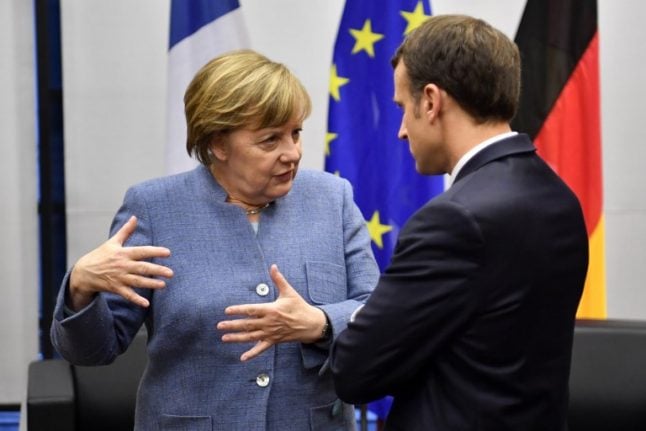 France is hoping that Germany will remain a “stable and strong” partner to allow the two partners to “move forward together”, the French presidency said after German coalition talks collapsed leaving the country in political turmoil.

The breakdown “only reinforces the need for France to propose, to take the initiative and to work on an ambitious European project that we will put in place with our German partner,” a statement from the presidency said.

French president Emmanuel Macron, who spoke to Merkel on Sunday, has pushing hard to reform Europe and won backing from Angela Merkel in his bid to shake up the bloc.

Among reforms he wants to see are setting up a separate budget for the 28-member group, as well as giving it its own parliament and finance minister.

But any chance he has of passing those reforms will depend on Germany and whether Angela Merkel can form a government.

But on Monday Chancellor Angela Merkel was left scrambling for ways to drag Germany out of crisis after high-stakes talks to form a new government collapsed, potentially forcing Europe's top economy into snap elections.

Germany now faces weeks, if not months of paralysis with a lame-duck government that is unlikely to take bold policy action.

With no other viable coalition in sight, Germany may be forced to hold new elections that risk being as inconclusive as September's polls.

That will delay or perhaps even kill off Macron's ambitious reform plans, which he laid out in a speech in Greece earlier this year.

His proposals, which formed part of Macron's election campaign platform earlier this year, would be submitted to European citizens early next year for a six-month debate.

Earlier on Monday Macron said of the German crisis: “It is not in our interest that the situation becomes tense.”

“It means that we need to go forward.”

Dominik Grillmayer, an expert at the Franco-German Institute in Ludwigsburg in Germany, said he was sceptical that Macron could advance without a German partner.

“Macron needs Merkel,” he told AFP, adding: “I fear that the European Union is going to be paralysed for the next few months. Nothing is going to move forward on the reforms or the Brexit negotiations.”