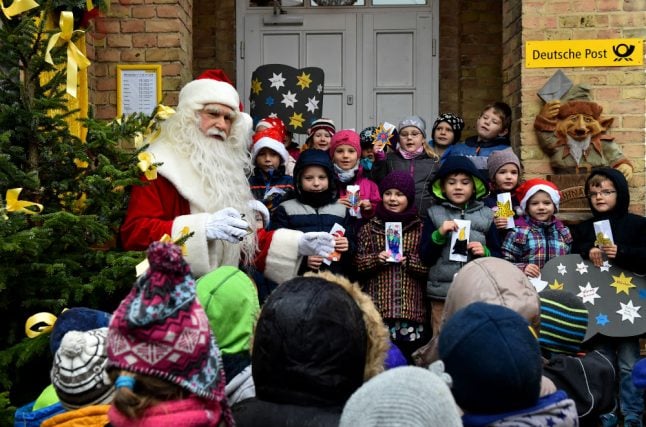 With Christmas over a month away, Santa and his helpers already have their hands full.

When the jolly man arrives with his entourage to open up the Christmas post office in the Brandenburg town of Himmelpfort on Thursday, the team will have to get cracking on the huge task ahead of them.

By the end of August, some 2,000 letters from children across the globe had already been counted at the post office, said Deutsche Post spokeswoman Tina Birke.

But the big man won’t be able to reply to all the letters himself. In the coming weeks, 20 diligent helpers speaking over two dozen different languages will sort through piles and piles of letters.

Everyone who writes to the Weihnachtsmann (as he’s known in Germany) should get a reply before Christmas – as long as their wish list arrives at his desk at least ten days before Christmas Eve.

Toys, mobile phones and tablets are particularly sought after, said Birke, but many children also wish for health for their family members or peace.

Last year, about 281,000 wish lists arrived in Himmelpfort, making it the largest of the seven Christmas post offices run by Deutsche Post in Germany.

Its origins go back to 1984, when a local postwoman discovered two letters to Santa from children in Berlin and Saxony.

She decided to answer them herself – and word quickly spread that this was the place to write to if you wanted to reach Santa.

By the early nineties, Himmelpfort was receiving about 2,000 letters to the Weihnachtsmann every year – and in 1995, Deutsche Post stepped in to provide helpers and give the depot the official status of post office for two months during the festive season every year.

The Christmas post office in Engelskirchen, North Rhine-Westphalia, also opens on Thursday. Last year, helpers at this branch also had their hands full as the post office received around 128,000 letters from 53 countries.

The remaining Christmas post office branches in Germany are located in Himmelsthür, Himmelpforten and Nikolausdorf in Lower Saxony, Himmelstadt in Bavaria and St. Nikolaus in Saarland.

Last year, a total of around 560,000 letters were counted from all seven of Germany’s festive post offices.

Fancy letting the Weihnachtsmann know what's on your wishlist this year?

You'll want to send a letter to: