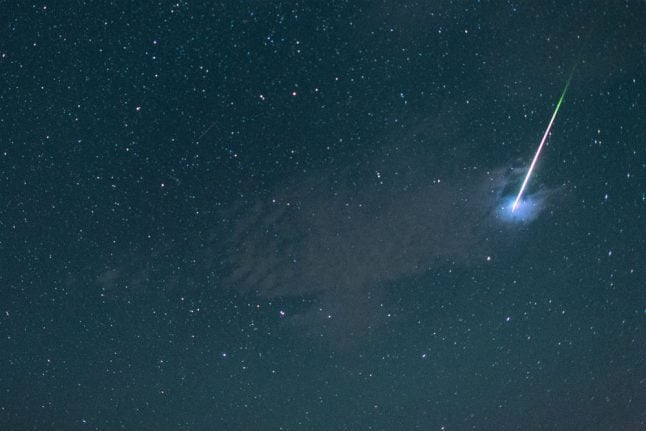 A shooting star spotted from Lower Saxony in 2015. Photo: DPA.

One Twitter user wrote that the light was “super bright and light green.” Other users described it as a “fireball.”

Many tweeted that what they had seen was “beautiful” or a “great view.”

The hashtag #Sternschnuppe – which translates to ‘shooting star’ – was one of the most popular hashtags used on social networks on Tuesday evening.

But whether the sighting was actually a shooting star – a streak of light seen in the sky caused by a meteorite – is unclear.

Police in Frankfurt said that celestial bodies might have burned up in the atmosphere, which is why the night sky seemed to glow.

The phenomenon could have a connection to the Leonids meteor shower. In mid-November, meteorites regularly enter the Earth's atmosphere and appear as shooting stars.

Meteorites are chunks from outer space that strike planets or their moons. Every hour, hundreds of tiny to fist-sized meteorites bombard the Earth. Most of them go unobserved though and fail to cause any major damage.

Despite the fact meteorites are considered small compared to asteroids, they can reach high speeds such as over 10 kilometres per second when they fall toward Earth and thus have the potential to be destructive.

But according to a police spokesperson, there were no indications of damage after the phenomenon was spotted on Tuesday evening.