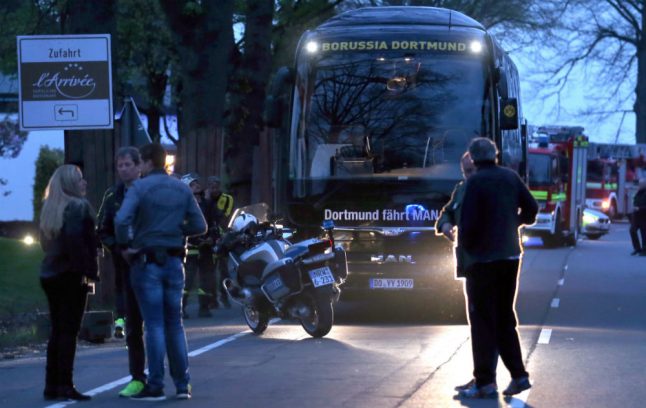 The Dortmund bus after the attack. Photo: DPA.

Sergej W., 28, has been charged with 28 counts of attempted murder, setting off explosions and causing serious physical injury in the assault on April 11th.

Prosecutors say he was hoping to profit from a drop in the football team's share price as a result of the attack.

The trial is expected to last until the end of March.

The suspect faces life in prison, although in Germany, parole is usually granted after 15 years.

Three explosive devices hidden in a hedge went off next to the team bus, just as it left the squad's hotel heading for a Champions League quarter-final match at home against Monaco.

Ten days after the bomb attack, the German-Russian was arrested, with prosecutors saying he was hoping to make huge amounts of money on the stock market in the wake of the attack.

The suspect had taken out options on thousands of Borussia's listed shares in advance and allegedly planned to sell them at a pre-determined level after the attack when he bet that share prices would plunge.

Investigators also suspect that the man may have been planning other attacks.

According to the indictment, quoted Monday by Spiegel Online, he searched the internet to learn more about cable car companies and their share prices.