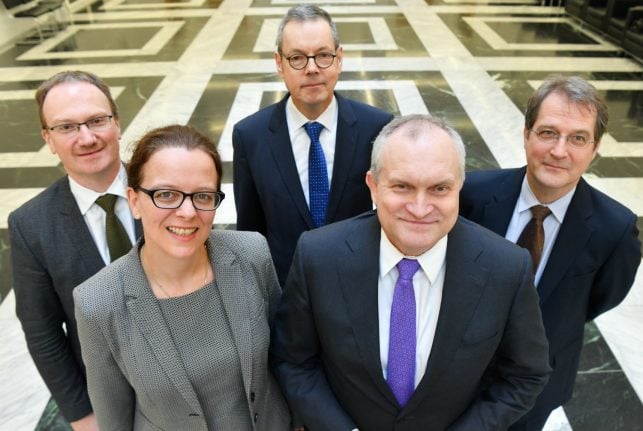 The "wise men" (and women) - and women - of the council of economic experts. Photo: DPA

Europe's largest economy should expand by 2.0 percent this year and 2.2 percent in 2018, the five so-called “wise men” – who number one woman among them – predicted in a 460-page report.

That was a substantial upgrade from their March forecast of 1.4-percent growth this year and 1.6 percent next year.

“The German economy is in a powerful upturn,” they wrote, so much so that it could be in danger of “overheating”, or growing at a pace faster than it will be able to maintain for the long term.

But strong growth for now offers plenty of options for an incoming government to modernise Europe's powerhouse, they added.

Chancellor Angela Merkel's conservatives are locked in talks with the liberal Free Democrats and the ecologist Greens to forge an untested three-way coalition following elections in September.

The economists advised leaders to reduce public debt, dismantle or lower some taxes, especially for the middle classes, and create an “innovation-friendly” environment for the digital economy.

A “solidarity surcharge” introduced to help pay for German reunification after 1990 should be abolished, they argued, backing a pet cause for the liberals.

They also warned that “one can already identify a shortage of skilled workers in some areas,” a risk that will grow as Germany's baby-boomer generation heads for retirement in the coming years.

Politicians can partly fend off the problem by making it easier to combine work and family life, improving education and training and making it easier for companies to hire people from abroad with urgently-needed skills, the experts said.

“Different parties each see the advice in their own way,” Chancellor Angela Merkel said as she accepted her copy of the report from its authors in Berlin.

Implementing the experts' counsel “isn't always as simple politically as it is obvious economically… we have to find the right balance” between growth-friendly tax cuts and fiscal prudence, she said.

Beyond Germany's borders, the report called for leaders to “decisively confront” protectionism in international trade that has taken centre stage since the US election of Donald Trump.

“Exhausting the remaining potential of liberalising trade could bring further increases in prosperity,” the experts argued, urging Washington and Brussels to resume stalled talks for a transatlantic trade deal known as TTIP.

Within the European Union, “momentum from France's President [Emmanuel] Macron can give the federal government a tailwind to drive integration forward together,” the report said.

The authors argued leaders should reform rules designed to steady member states' finances and buttress the bloc's internal market, especially with new initiatives for an EU-wide level playing field in the banking sector and capital markets.

The experts still hope Britain's departure from the EU can be stopped, but pressed for an agreement “that would minimise damage for both sides” if it goes ahead.

“Negotiating such a deal would likely take longer than the two years provided for in Article 50” of the EU treaty, they noted, suggesting a “one-off extension” of the deadline to ease talks.

Nevertheless, the EU's so-called “four freedoms” – of movement of capital, people, goods and services — are “essential”, they added, ruling out “cherry-picking” from London.